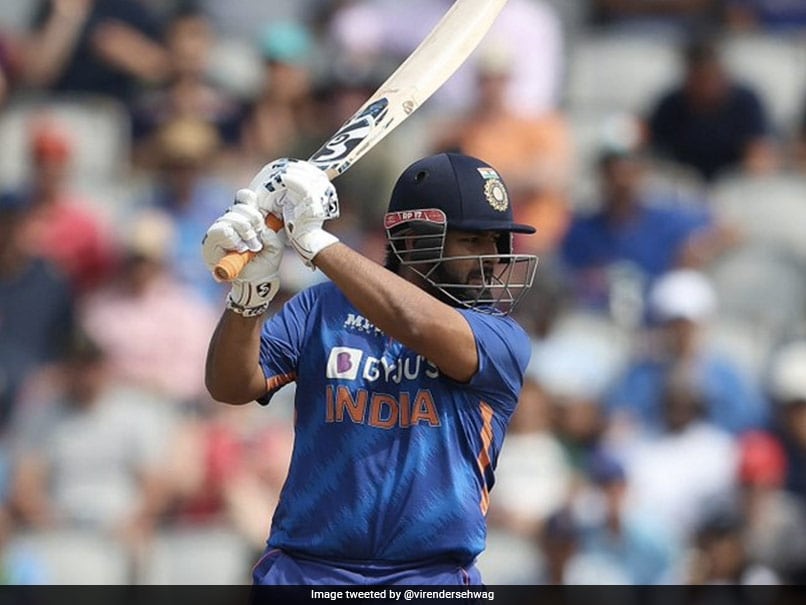 ENG vs IND: Rishabh Pant plays a shot during the third ODI.© Twitter

Wicketkeeper-batter Rishabh Pant was at his scintillating best in the third and final ODI against England as he went on to play am unbeaten knock of 125 off just 113 balls with the help of 16 fours and 2 sixes. His maiden ODI century helped Team India chase down 260 with five wickets in hand and 47 balls to spare. This innings was all the more special as he came into bat when India were in a spot of bother at 21/2 with both Shikhar Dhawan and Rohit Sharma back in the hut.

Former India batter Virender Sehwag took note of how Pant raises his game in series deciders, and he tweeted: "Last match of a series and @RishabhPant17 playing brilliantly - this is a better love story than twilight. Incredible innings from an incredible player - with great support from Hardik and Jadeja. #IndvsEng."

Last match of a series and @RishabhPant17 playing brilliantly - this is a better love story than twilight.

Incredible innings from an incredible player - with great support from Hardik and Jadeja.#IndvsEng pic.twitter.com/WRGMEFb3sA

It is important to note that Pant has a knack of bringing out his best in the last match of a series and all his centuries in the longest format have come in the last match of the series. He also played an unbeaten knock of 89 at the famous Gabba Test, helping India win the Border-Gavaskar Trophy 2-1 in 2020-21.

Talking about the third ODI against England, India were 72/4 chasing 260 and it was then that Pant and Hardik Pandya formed a 133-run stand for the fifth wicket.

Hardik lost his wicket after scoring 71 but Pant remained unbeaten on 125. His innings also included five consecutive boundaries in the 42nd over bowled by David Willey.

Pant will next be seen in action in the upcoming five-match T20I series against West Indies, beginning July 29.

Sponsored by Vuukle
Comments
Topics mentioned in this article
England vs India, 2022