Wriddhiman Saha Returns After Surgery, Hopeful Of Making A Comeback For Australia Tour

Wriddhiman Saha's rehab will begin at the Bengaluru-based National Cricket Academy after a couple of weeks' rest. 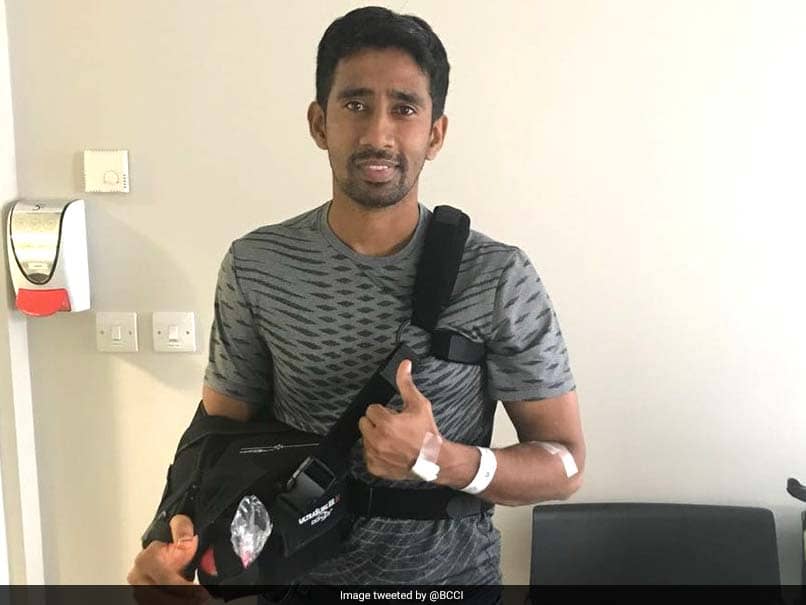 Wriddhiman Saha's shoulder injury ruled him out of contention for the ongoing tour of England.© Twitter

India's Test wicket-keeper Wriddhiman Saha, who on Thursday returned to Kolkata after a shoulder surgery in Manchester, oozed optimism that he would be fit for the Australia tour in December. Saha added that he won't be able to move his hands for three weeks. "It's not easy. You cannot move the hand and keep it at one position. It's worse than facing fast bowlers. But this is the only way to go forward and make a comeback," Saha told reporters.

Sporting a stubble, Saha's right hand was heavily strapped from below the elbow. The 33-year-old had a laberal repair surgery at the Arm Clinic in Manchester.

After a couple of weeks' rest, Saha's rehab would begin at the Bengaluru-based National Cricket Academy.

During the Indian Premier League (IPL), Saha suffered a thumb injury that kept him out of the one-off Test against Afghanistan in June.

It was later discovered that Saha was carrying a shoulder injury that ruled him out of contention for the ongoing tour of England.

The Australia Test series begins in December 6, which may be a realistic chance of Saha's comeback plans.

"It's still a long way to go for the Australia tour (in December). Let's see, I'm keeping my fingers crossed," he said.

"Nobody can have a say on injury which is a part and parcel of a sportsperson's career. But one should not play with injury."

"Normally in 55 per cent cases this injury does not recur after it's healed. It all depends the way I recover and how I recover. I don't want to fasten it and take my time. I want to go slow so that this does not aggravate again," he said.

Wriddhiman Saha England vs India, 2018
Get the latest updates on IPL 2021, IPL Points Table , IPL Schedule 2021 , live score . Like us on Facebook or follow us on Twitter for more sports updates. You can also download the NDTV Cricket app for Android or iOS.