Out of Virat Kohli's 149 runs in the first innings of the Edgbaston Test, only 17 runs came off James Anderson's bowling. 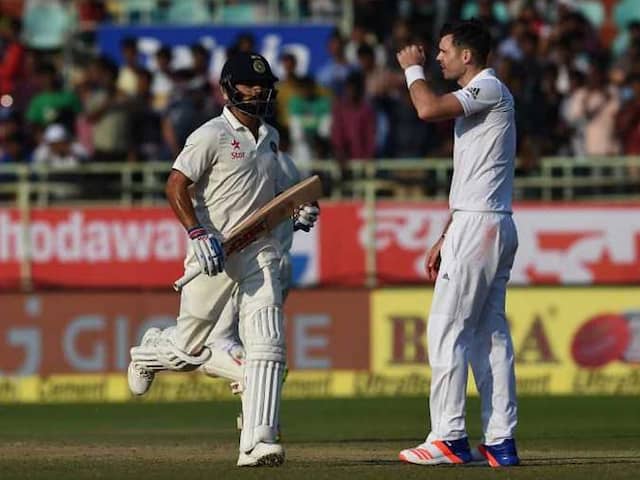 Virat Kohli, the World No. 1 Test batsman, and James Anderson, the World No.1 Test bowler, will yet again go toe-to-toe in the second Test match at Lord's, beginning on August 9. While Virat Kohli scored a total of 200 runs in the first Test, James Anderson finished the match with figures of 4/91. Ahead of the second Test, talking about his rivalry with the Indian skipper, Anderson said he loved the battle with Virat Kohli at Edgbaston. He further added that since he didn't dismiss him in the first Test, he will be more determined to be on top of his form.

"I guess that's top-of-the-range stuff and I certainly loved the battle with him at Edgbaston. I felt good bowling to Virat and my plans worked well. I might have dismissed him a few times with some plays and misses plus a dropped catch," Anderson wrote for The Sun.

"But the fact is, I didn't get him out and he scored a century and a half-century. So I'm not getting carried away! In fact, it makes me even more determined to be on top form in the Second Test at Lord's," the 36-year-old bowler added.

However, Anderson mentioned that he will be trying something different to keep Kohli in check. Out of Kohli's 149 runs in the first innings of the Edgbaston Test, only 17 runs came off Anderson's bowling.

"I'll look at some videos to see if I can do anything different. But, generally, I think all our bowlers were good against Kohli. Before he went into one-day mode while batting with the tail, we kept him in check. And we were successful against the other Indian batsman," the English pacer remarked.

The right-arm bowler also wrote about the banters that took place in the first Test.

"The game was played in a good spirit and there's a lot of respect both ways between myself and Virat. There was the odd smile when I bowled a good ball and the odd smile from him."

"I gave him a couple of freebies on his legs that he clipped for four and he said something like 'That's not like you, giving me freebies!' It was teasing, really, leg-pulling. All in good spirit."

Virat Kohli England vs India, 2018 Cricket England vs India, 2nd Test
Get the latest Cricket news, check out the India cricket schedule, Cricket live score . Like us on Facebook or follow us on Twitter for more sports updates. You can also download the NDTV Cricket app for Android or iOS.