India vs England: Yuzvendra Chahal Says MS Dhoni Grind A 'Chance To Get A Knock'

India were 140 for four, needing a further 183 runs in 23 overs to reach their target of 323, when Dhoni came into bat at 'the home of cricket' on Saturday. 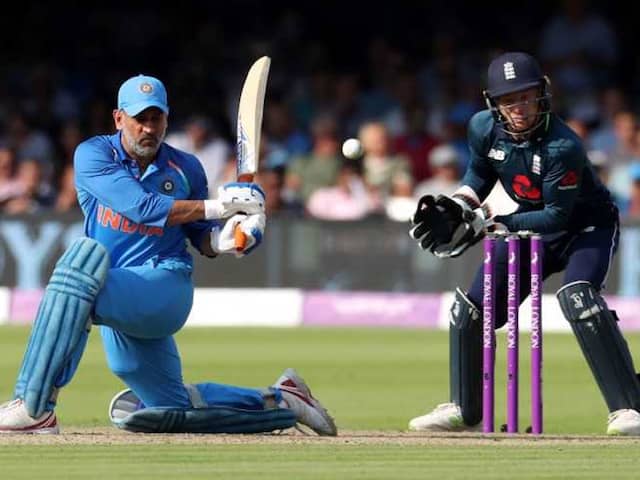 MS Dhoni scored 37 off 59 balls in the second ODI against England.© Reuters

Yuzvendra Chahal has explained MS Dhoni's strangely sluggish innings during the second one-day international against England at Lord's by saying it was a "chance to get a knock". India were 140 for four, needing a further 183 runs in 23 overs to reach their target of 323, when Dhoni came into bat at 'the home of cricket' on Saturday. India desperately needed quick runs, something well within the capabilities of the often aggressive Dhoni, who on Saturday became just the 12th man to score 10,000 ODI runs but the only one with an average of over 50. Yet instead Dhoni, one of the best finishers of a white-ball innings in the modern game, made a sedate 37 off 59 balls with just two fours.

When he eventually holed out off Liam Plunkett with a rare lofted shot, India were effectively beaten at 215 for eight with just under four overs remaining.

India were bowled out for 236 off the last ball of the match as England won by 86 runs to level the three-match series at 1-1 ahead of Tuesday's finale at Headingley.

At times Dhoni gave the appearance of batting in the nets, but India tailender Chahal defended his approach by saying: "Because later on there were only me, Siddarth (Kaul) and Kuldeep (Yadav), so it wasn't like two or three batsmen were remaining.

"I think throughout the series Dhoni hasn't batted, so this was a chance to get a knock. Because if he had hit a shot and gotten out, maybe we couldn't have batted all 50 overs."

But given this is a bilateral series, rather than a tournament where net run-rate is in play, there was no greater direct benefit to India in losing in 50 overs than earlier in their innings.

- 'Bad days' -
The 37-year-old Dhoni, a veteran of 320 ODIs who effectively won the 2011 World Cup final for India against Sri Lanka in Mumbai off his own bat and India captain Virat Kohli said Saturday it was wrong for pundits to "pounce" on the former skipper and "jump to conclusions".

"This comes up again and again when he is not able to play in the normal way he does," Kohli said.

He added: "When he does well, people call him the best finisher ever and when they don't go well, they all pounce on him.

"We all have bad days in cricket and today was a bad one for everyone, not just him.

"Also, you want to take the innings deep; you don't want to just lose by 160-170 runs, and he has the experience, but some days it just doesn't come off.

"Other people jump to conclusions, but we don't -- we totally believe in him."

Dhoni's innings may not have been quite as extraordinary as India opening great Sunil Gavaskar's infamous 'go-slow' against England at Lord's in the inaugural match of the first World Cup in 1975, when he carried his bat for an unbeaten 36 in a 60-over match his side lost by a mammoth 202 runs, but it was curious all the same.

"I thought it was a very odd innings from the greatest-ever finisher in white-ball cricket," said ex-England captain Nasser Hussain, commentating on Sky Sports.

"Who are we to criticise MS Dhoni? But, I'd rather India have gone down with a bit of a fight than a whimper.

"It was a very odd innings -- it looked like he was just having a net and preparing himself for the next game."

Yuzvendra Chahal Lord's, London England vs India, 2018 England vs India, 2nd ODI
Get the latest Cricket news, check out the India cricket schedule, Cricket live score . Like us on Facebook or follow us on Twitter for more sports updates. You can also download the NDTV Cricket app for Android or iOS.