Chris Woakes said that the Indian batsmen capitalised well on conditions and didn't give any chances away in the middle session. 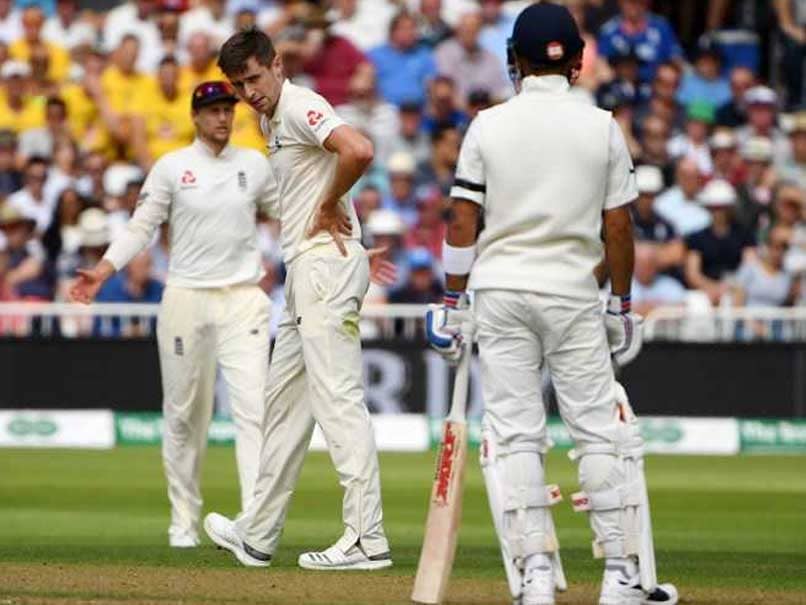 Chris Woakes ended day one of the third Test with figures of 3/75.© AFP

England pacer Chris Woakes said that Indian batsmen capitalised well on conditions and didn't give any chances away in the middle session, which allowed them to finish day one of the third Test at 307/6. Woakes picked up three wickets in the morning session to end India's 60-run opening partnership. Following that, Virat Kohli (97) and Ajinkya Rahane (81) strung together a 159-run partnership to steady the Indian ship. Though Woakes credited the Indian side for batting patiently, he also mentioned that the English bowlers struggled to create chances in the middle period.

"The ball moved around pretty much all day - there was probably a period through the middle when it didn't do quite as much, when the sun was out, and they capitalized on that. I think we bowled reasonably well, and they combated it pretty well. Throughout that middle period, we struggled to create a chance," Woakes said after the end of day one.

"It was an even day overall, I think. When you do win the toss, and go out there and have a bowl, there's always that added pressure to skittle them early. But credit to India, I thought they played pretty well," Woakes further added.

Both Kohli and Rahane were dismissed before they reached the three-figure mark. While Rahane was sent packing by Stuart Broad, spinner Adil Rashid made Kohli his victim.

"If he (Rashid) could do that when he's on nought, that'd be nice. But Virat's a world-class player, so to get him out at any point in the game is important - because obviously he can go on and score big ones, go on and get 'doubles'," Woakes remarked.

"So that's a big wicket for us, and to then get another tonight was important. When I came on I felt like the ball actually started swinging after about 15 overs the lacquer came off and it started moving a little bit more in the air. The wickets leading to lunch were important," he said.

Rishabh Pant made an electric start to his Test career with a second-ball six, and held ground for India at stumps.

"He's an extremely good white-ball player. He obviously comes out and plays his shots, as we saw to Adil. (But) I suppose in English conditions, you like to think if you put the ball in the right areas enough we might be able to find his edge," said the bowler.

Woakes also spoke about Ben Stokes, who had an average outing with the ball going wicket-less in 15 overs.

"There was no real difference in Ben. He's the same as he always is - obviously desperate to do well, desperate to perform for England. He's one of the hardest trainers in the team.

"Today probably didn't go as well as he'd have liked. He'd have liked to pick up a couple of wickets, but that's the game," he signed off.

Chris Woakes England vs India, 2018 Cricket England vs India, 3rd Test
Get the latest updates on IPL 2021, IPL Points Table , IPL Schedule 2021 , live score . Like us on Facebook or follow us on Twitter for more sports updates. You can also download the NDTV Cricket app for Android or iOS.