Virat Kohli and Ajinkya Rahane starred with the bat for India on Day one of the third Test against England at Trent Bridge. 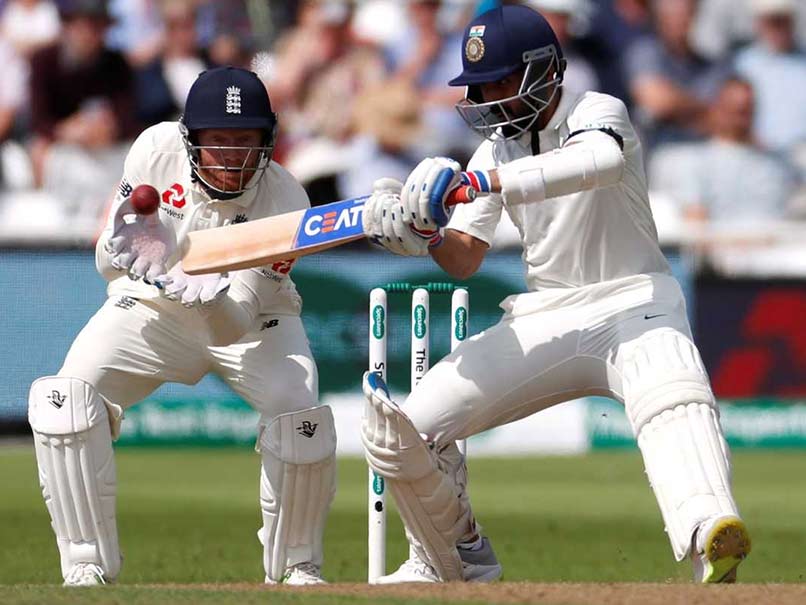 India, after a poor batting display in the first two Test matches against England, produced a good batting effort on Day one of the third Test at Trent Bridge on Saturday. Riding on a fourth-wicket partnership of 159 between India captain Virat Kohli (97) and vice-captain Ajinkya Rahane (81), that spanned more than 40 overs, India ended the opening day on 307/6. Talking about the players and their improved batting performance, assistant coach Sanjay Bangar said India's batsmen are under tremendous pressure and 'playing for their careers'.

"...The players themselves are under tremendous pressure - they are playing for their careers. We understand that," Bangar said at the end of first day's play.

"To make at times when things don't really work in your favour, it is important to maintain composure, have the same sort of sense whether things are going well or not going well. Maintaining your equilibrium, that helps," Bangar further said.

The batsmen's poor performances had raised questions on the support staff but Bangar said that such pressure only comes with the job.

"All of us understand clearly there is no magic wand we can work on any batsman. You have to understand the last five Test matches we played abroad have been in really trying conditions except for the Centurion Test."

"Take the Johannesburg Test, which we from within the group believe was one of our best performances, not in terms of the number of runs but the victory we achieved in trying circumstances. So what we value is that Test win over any Test win we have had," Bangar further added.

"And yes, handling pressure is part and parcel of any professional's job and we try and do whatever we can do, the support we can give and the plans that we can strategise," Bangar asserted.

Bangar said that subtle changes in technique by the batsmen helped India at Trent Bridge.

"The way Shikhar (Dhawan) made the changes to his batting, the way he reduced his bat speed, the way he played the ball later, these adjustments he made in the last 6-7 days, he should get credit. KL Rahul, too, was playing on the back foot, and he was reacting after the ball's movement. These changes the batsmen have made make me hopeful for the rest of the series."

"With five more innings left, if our batsmen can play in the same way, their performance graph will carry on to improve," he added.

Dhawan and Rahul put on 60 runs, which was India's best opening partnership outside Asia and West Indies since 2013.

"Overall I think the discipline was far, far better. The start Shikhar and Rahul gave us, that was crucial. We all know that with the Dukes ball first 10-15 overs can be crucial. Most teams if they bat well 30-35 overs and show discipline they can cash in later on," Bangar said.