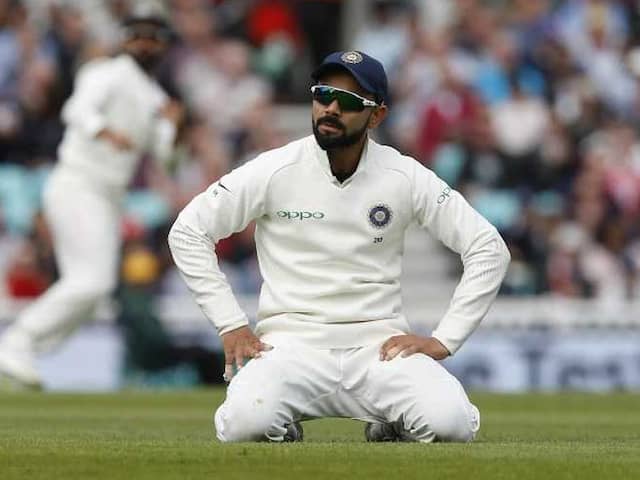 Virat Kohli says that he doesn't care about perceptions.© AFP

Team India skipper Virat Kohli, who is the leading run-scorer in the ongoing five-match Test series against England, has said that numbers are inconsequential for him and what he brings onto the field is of utmost importance. "I didn't start playing to have numbers and they are inconsequential. People remember your attitude and what you brought onto the field," Kohli said during an interview with Michael Holding on Saturday. Having scored nearly 600 runs in four Tests, Kohli once again validated the fact that he is one of the finest batsmen in the world right now. When he was questioned on how he handles the on and off-field pressures, the 29-year-old said that he doesn't care about perceptions.

"I am more focussed on having a very solid life, being happy with life and doing the right things on a daily basis and then everything else seems to be an enjoyable journey as a part of the larger process," he said.

"For me, the larger picture is always going to be life. If I am solid and doing the right things, then I am much more confident on the field. I don't play for perceptions, for people or for reputation, I only play to make the team win and that's why I started playing the sport."

India have lost back-to-back Test series in South Africa and England, when asked where exactly things went wrong for his team, Kohli pointed out two crucial phases - the second innings chase at the Edgbaston (1st Test) and the first innings at Southampton (fourth Test).

He also said that as a leader, he is the first one to own up mistakes.

"I am always focused on where my mistakes are and how I can improve upon them. I am willing to accept mistakes even in the best of times so that I can keep on improving.

"It's important for the team that my mindset stays good so that I can lead from the front and if I am only thinking about my performances, then I am not doing justice to the responsibility that I am given."

"It was a competitive series and we have already understood and admitted the things that we haven't done well. That's something we are keen to improve on as to get into competitive positions, you understand that you have the ability. But ability only takes you to a certain extent and then your mental toughness comes into play when you have to win Test series in difficult conditions and difficult countries, something that we aspire to do," he said.

"When you don't do that being in winning positions, obviously hurts more than anything. Probably, that's frustrating, we have shown skill sets to get into winning positions and not capitalise on them. Try and get better as a team. Provided we are mentally tougher than the opposition in difficult situations."

Virat Kohli England vs India, 2018 Cricket England vs India, 5th Test
Get the latest Cricket news, check out the India cricket schedule, Cricket live score . Like us on Facebook or follow us on Twitter for more sports updates. You can also download the NDTV Cricket app for Android or iOS.