Chasing a decent target of 199 on a small ground, India made a bright start with 21 runs on board. 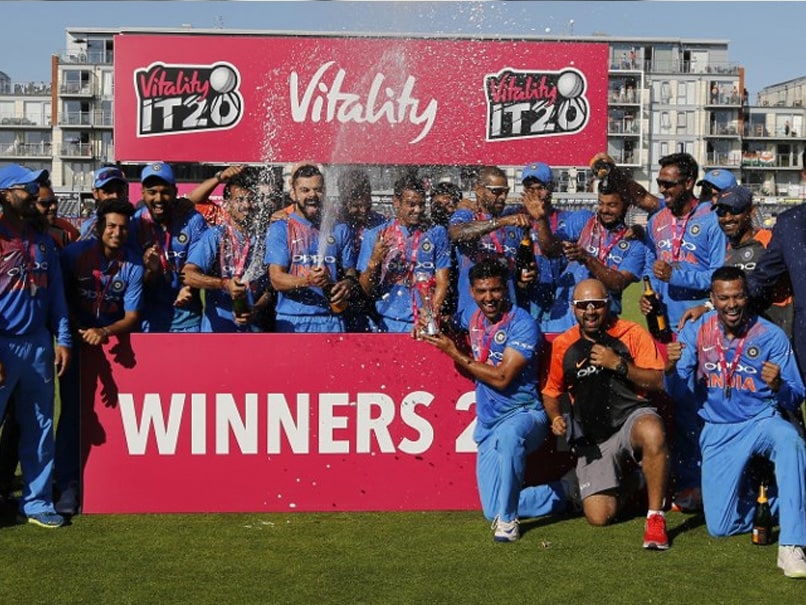 Rohit Sharma's elegant unbeaten century made it a walk in the park for India as they cruised to a seven-wicket victory against England to clinch the three-match T20 International series 2-1. The Indian vice-captain made a target of 199 look ridiculously easy on a small Bristol ground after the visiting bowlers did a commendable job at the back end to restrict the hosts to a sub-par score. Captain Virat Kohli (43 off 29 balls) played his part with his authoritative strokeplay while Hardik Pandya, who shone with the ball earlier with a four-wicket haul, also made a significant contribution with the bat.

Pandya hit 33 not out off just 14 balls as India reached to 201 for 3 in 18.4 overs. The series win set the right tone for the gruelling challenges ahead with the three-match ODI series, up next, starting from July 12.

Rohit stroked his way to 100 not out, his third T20I hundred, with the help of 11 fours and five sixes, adding 89 runs for the third wicket with Kohli, who got his first score of note on the tour of UK.

Virat's 43 came from 29 balls and had two fours and two sixes. Chasing a decent target of 199 on a small ground, India made a bright start with 21 runs on board after the second over but opener Shikhar Dhawan (5) got out immediately as Jake Ball made a fine diving catch at short fine leg.

The other opener Rohit Sharma was in good touch as he hit Liam Plunkett for two sixes and a four in the fourth over to build up the momentum of the Indian run chase.

Lokesh Rahul (19 off 10 balls) fell to a spectacular catch by Chris Jordan who made a huge ground from long-on and then flung himself full length to pluck the ball out of nowhere. Despite that, India were on course with 70 on board for 2 wickets at the end of powerplay.

Ben Stokes was introduced in the seventh over and he made an immediate impact by conceding just two runs from that over. But Rohit was not the one to remain quiet as he collected a few more fours to reach his fifty off 28 balls in the ninth over while also taking Indian score to 100 for 2 at halfway mark.

Rohit then launched on Plunkett with a six and a four in the 11th over and captain Virat Kohli, who came on the crease at the fall of Rahul, joined the party with a six in the next over to place India well on course of the target.

The Indian captain began to gain in confidence as he hit another six off Plunkett before he fell victim of Jordan in the 15th over, caught and bowled by the bowler in a soft dismissal. Hardik Pandya, who came in for Kohli, immediately found the boundaries and India needed just 29 from the last three overs to win the match.

India took 20 runs in the 18th over with Pandya hitting two fours and a six. Then he hit the winning runs, a six off Jordan to clinch the series.

Earlier, opening batsman Jason Roy rained sixes in his blistering innings of 67 off just 31 balls but India made a superb fightback on the back of Hardik Pandya's four-wicket haul to restrict England to 198 for nine.

Sent into bat, Roy and his opening partner Jos Buttler (34 runs of 21 balls) shared 94 runs from 7.5 overs to make a flying start in their innings as the duo dealt in fours and sixes initially. England would have posted a much bigger total but for the comeback by the Indian bowlers led by Hardik Pandya who took 4/38.

Some poor bowling from Indian pacers, who either sprayed the ball or bowled too short, helped England in making a bright start.

The visitors also did not do too well in the powerplay overs and England made merry under the sun as they had hit eight fours and two sixes within the first five overs.

Buttler was dropped by Siddharth Kaul when on 20 with Chahal being the unfortunate bowler. Roy, on the other hand, reached his third T20I half-century off only 23 balls, inclusive of four fours and five sixes.

The breakthrough came just as India were starting to wonder where to bowl to the opening duo. Kaul (2/35) bowled a quicker, fuller delivery and Buttler missed as he was bowled.

Pandya bowled poorly in his first spell, against the field set by his captain as he was taken for two fours and two sixes, but returned later to impact the English middle order.

In the 14th over, Chahal missed a chance to dismiss Eoin Morgan (then on 4), failing to latch onto a high catch at cover only to end up banging his head on the ground. He went off for some treatment but Morgan did India a favour with another skier off the very next ball. Dhoni completed the catch this time around.

Pandya was not done yet, as he had Alex Hales (30) caught behind too.

England lost four wickets for 46 runs before Ben Stokes (14) and Jonny Bairstow (25 off 14 balls) had a 37-run partnership. There was another mini collapse thereafter, as the hosts lost five wickets for 21 runs in the last 14 balls to finish below the 200-run mark.

Eoin Morgan Cricket England vs India, 2018 England vs India, 3rd T20I
Get the latest updates on IPL 2021, check out the IPL 2021 Schedule and Indian Premier League Live Score . Like us on Facebook or follow us on Twitter for more sports updates. You can also download the NDTV Cricket app for Android or iOS.