Ben Stokes was omitted by England because he is in court this week on a criminal charge of affray. 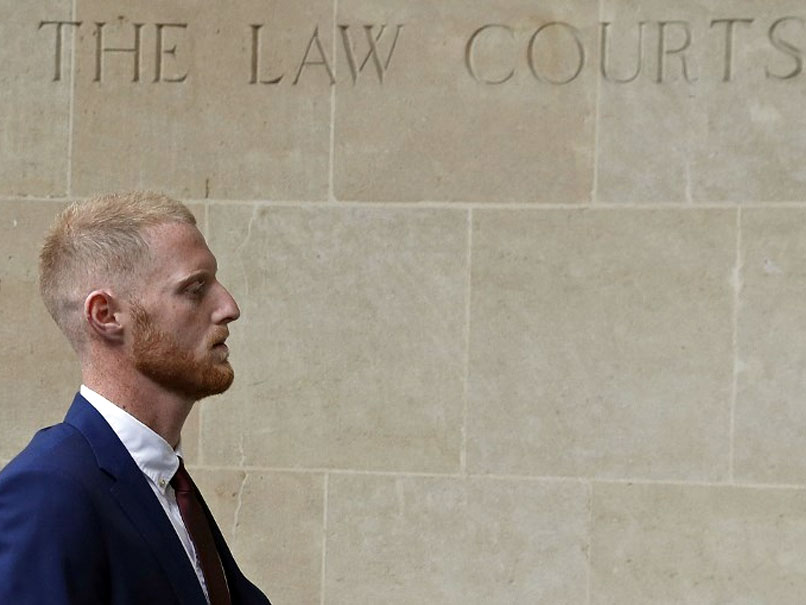 Chris Woakes has been called up in Ben Stokes' place to the England squad.© AFP

England will be without Ben Stokes while India could make changes too for the second Test at Lord's on Thursday. Stokes played a starring role in England's 31-run win in the first Test of a five-match series at Edgbaston last week, including taking the wicket of India captain Virat Kohli, who had been anchoring the tourists' run-chase. But Stokes was omitted by England because he is in court this week on a criminal charge of affray. Fellow pace-bowling all-rounder Chris Woakes has been called up in his place to the England squad, with uncapped Surrey batsman Ollie Pope selected instead of Dawid Malan, dropped after a run of low scores.

As well as taking five wickets in his main role as a left-arm swing bowler, Curran's sparkling second-innings 63, his maiden Test fifty, enabled England to set India a tricky target of 194.

It proved beyond the tourists, despite Kohli making 51 to follow his first-innings 149 -- the star batsman's maiden Test century on English soil.

Neither side made 300 in the match, England posting 287 before top-ranked India replied with 274 in the first innings.

India struggled against the swinging ball, with England finding it difficult to combat Ravichandran Ashwin's off-spin.

In 17 Tests since Root became the captain in July 2017, England have managed just nine hundreds between them and, even more concerningly for their fans, have been dismissed for under 300 in their first innings seven times and for under 250 in the second innings nine times.

If they are serious about rising from their current position of fifth in the world Test rankings, it is a problem England must address.

In Pope they have a batsman who has been in superb form for County Championship leaders Surrey so far this season with 684 runs at a huge average of 85.50, including three centuries and a top score of 158 not out.

Root, frustratingly run out for 80 in England's first innings at Edgbaston, said it was important to put the side's batting struggles into perspective.

"I think it's sometimes easy to criticise the batting group but I thought the way both seaming groups in particular bowled was outstanding."

India too could make a top-order change with the experienced Cheteshwar Pujara waiting in the wings if struggling opener Shikhar Dhawan is omitted.

They also have the option of playing a second-spinner, be it orthodox left-armer Ravindra Jadeja or left-arm wrist-spinner Kuldeep Yadav, with all-rounder Hardik Pandya the man most likely to miss out if either slow bowler is selected.

"It's a good choice, a tough one too," Bharat Arun, India's bowling coach, told reporters at Lord's on Tuesday.

"We really need to look at any change in strategy, depending on the wicket."

But Arun said Jasprit Bumrah was "out of contention", the paceman still sidelined after missing the first Test with the broken thumb he suffered during a Twenty20 international against Ireland in June.

As for India needing more runs from their batsmen, Arun said: "If you look at the (Edgbaston) scores, it's only Virat Kohli and Joe Root who have been able to contend with the moving ball.

"The conditions were trying. The challenge is there for us to adapt even better and we have our plans in place."

But he was wary of playing an extra batsman at Lord's.

"I would consider that as a conservative move," Arun added.

"Everything depends on the conditions -- and if the conditions are not going to be as friendly as in the first Test, it makes more sense to play five bowlers."

Ben Stokes Lord's, London England vs India, 2018 Cricket England vs India, 2nd Test
Get the latest updates on ICC T20 Worldcup 2022, check out the Schedule and Live Score. Like us on Facebook or follow us on Twitter for more sports updates. You can also download the NDTV Cricket app for Android or iOS.