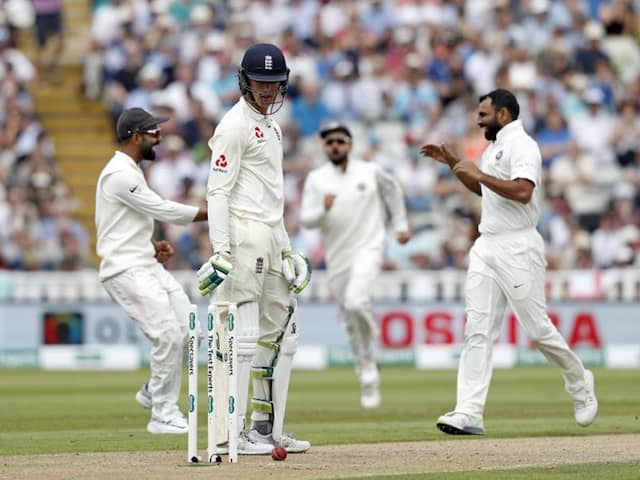 Off-spinner Ravichandran Aswhin produced one of his most impactful performances outside the sub-continent as India reduced England to 285 for 9 on the opening day of the first Test match at the Edgbaston cricket ground in Birmingham. Ashwin claimed 4 for 60 and was well accompanied by his team-mate pacer Mohammed Shami. Shami claimed two crucial wickets to put his team in driver's seat. Shami bowled an incisive spell after lunch, dismissing Keaton Jennings (42) and Dawid Malan (8).

Jennings was the first to go, but in an odd manner.

The England batsman tried to block a short-pitched delivery from Shami but got a faint inside edge. The ball went through his legs and dislodged the bails. Jennings looked back in disappointment.

After dismissing Jennings, Shami immediately jolted the hosts again trapping new man Dawid Malan (8) plumb in front to reduce them to 112 for 3 in no time.

The duo forged an unbeaten 51-run stand for the fourth wicket and guided England safely to the tea break at 163 for 3.

Root (80) and Jonny Bairstow (70), however, put some fight but some brilliant fielding and bowling from Virat Kohli and Umesh Yadav, respectively, saw the departure of both batsmen.

Mohammed Shami England vs India, 2018 Cricket
Get the latest Cricket news, check out the India cricket schedule, Cricket live score . Like us on Facebook or follow us on Twitter for more sports updates. You can also download the NDTV Cricket app for Android or iOS.