Kuldeep Yadav took the prized wicket of Jos Buttler (69) in the 18th over as India successfully restricted the hosts to a modest 159/8 in 20 overs. 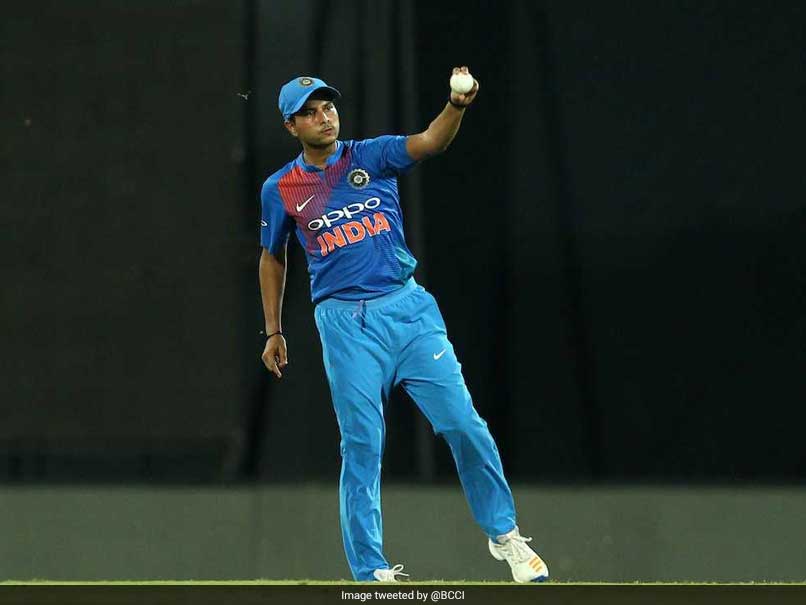 India's Kuldeep Yadav on Monday became the first-ever left arm spinner to take five wickets in a T20I inning. He achieved this feat in the first T20I clash against England at Old Trafford in Manchester. Kuldeep took the prized wicket of Jos Buttler (69) in the 18th over as India successfully restricted the hosts to a modest 159/8 in 20 overs. England's innings was held together by opener Buttler as he made a 69 off 46 balls before he also succumbed to the impressive Kuldeep. The England wicket-keeper's knock was his seventh fifty in T20 internationals and took him past 5,000 runs in all T20 cricket. England kept the same team which beat Australia by 28 runs in a solitary T20 international following their 5-0 one-day international series whitewash against the same side.

England's middle-order had no counter to Kuldeep's attacks. Skipper Eoin Morgan (7), Alex Hales (8), Jonny Bairstow (0) and Joe Root (0) had no clue about Kuldeep's deceiving turns as they succumbed to his deliveries. Buttler was the sole ray of hope in the England team. The hosts had got off to a flying start as they were 50 up in the first five overs. Buttler and Jason Roy were at their blistering best in hammering the Indian pacers Bhuvneshwar Kumar (0/45) and Umesh Yadav (2/21) early in the match.

However, after Roy's dismissal, India got back into the match courtesy of Kuldeep's fiery spell with the ball. David Willey played a 15-ball 29 runs cameo, in the end, to help his team reach a decent total. Kuldeep's performance stood out as he single-handedly dismantled England's famed batting line-up. Kuldeep made his T20I debut against West Indies at the Sabina Park in 2017.

Virat Kohli Cricket England vs India, 2018
Get the latest updates on IND vs NZ 2021, check out the Schedule and Live Score . Like us on Facebook or follow us on Twitter for more sports updates. You can also download the NDTV Cricket app for Android or iOS.