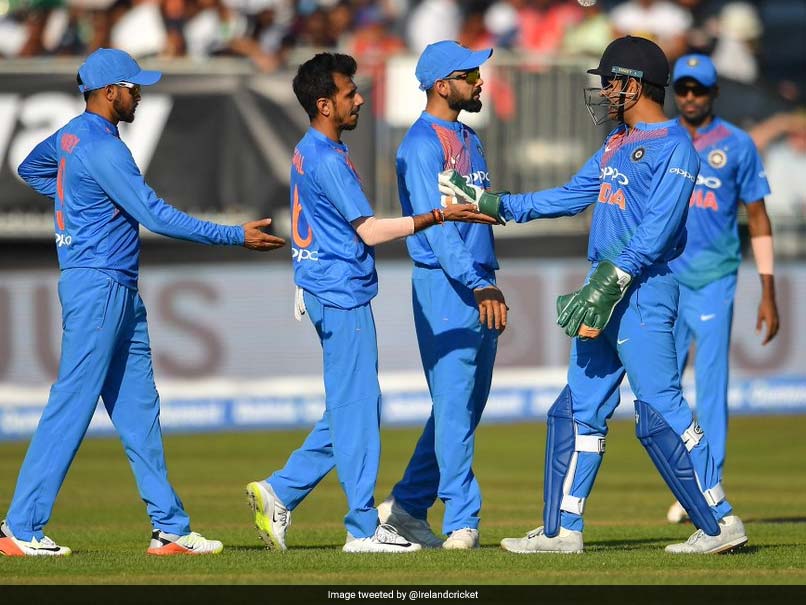 India rode on an all-round effort to kick off their English summer with a 76-run thrashing of minnows Ireland in the first of the two-match T20I series on Wednesday. Put into bat, the visitors posted a commanding 208/5, thanks to brilliant half centuries from seasoned openers Rohit Sharma (97 off 61 balls; 4x8, 6x5) and Shikhar (74 off 45 balls; 4x5, 6x5) before the bowlers sprung into action to restrict the hosts for a meagre 132/9. Ireland's chase surrounded around opener James Shannon's (60 off 35; 4x5, 6x4) half-century as all the other batsmen faltered in reading India's wrist spin twins -- Yuzvendra Chahal (3/38) and Kuldeep Yadav (4/21). Ireland batsmen's weakness against quality spin bowling was clearly exposed as wickets started to crumble one after the other as soon as skipper Virat Kohliemployed Chahal and Kuldeep.

With the powerplay yielding 43 runs for the loss of Paul Sterling's (1) wicket, Chahal packed back Irish No.3 Andrew Balbirnie (11) stumped by Mahendra Singh Dhoni off just his third ball, before getting Kevin O' Brien (10) and skipper Gary Wilson (5) off successive deliveries. Kuldeep too had a similar story, getting his first wicket of Simi Singh (7) off his third ball before getting the big fish Shannon trapped in front.

The Chinaman completed his spell with two more wickets --Stuart Thompson (12) and Stuart Poynter (7) -- as the hosts were left high and dry with the scoreboard reading 123/8.

Earlier, Rohit and Dhawan forged the second highest opening stand of 160 runs to help India post a commanding 208/5 despite paceman Peter Chase's heroics in the final over, where he picked three quick wickets.

The hapless Irish attack drastically failed to control the onslaught from the ruthless Indian openers as the score swelled to 150 runs by the 16th over with Dhawan bringing up his fifty off mere 27 balls and the right-hander racing to his half ton in 39 deliveries.