KL Rahul has been in a rich vein of form and scored a century in the 1st T20I vs England. 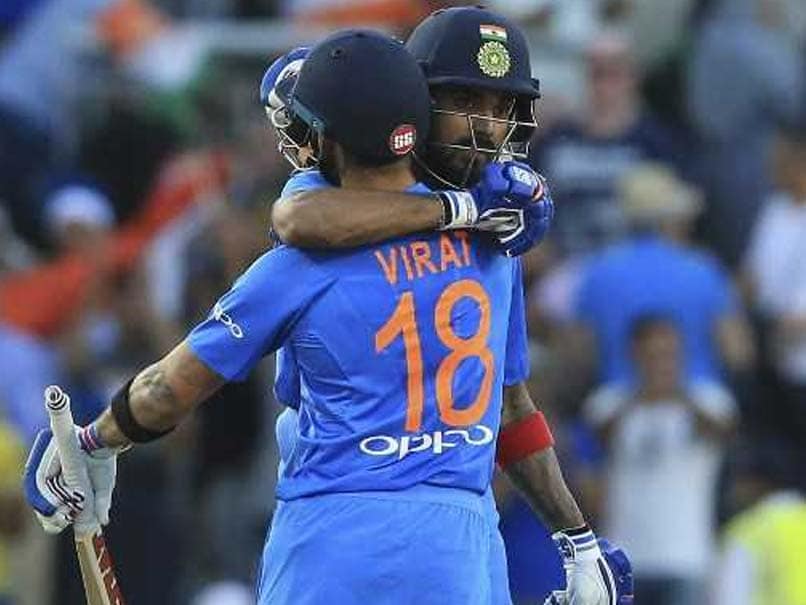 KL Rahul hit a stylish century to lead India to a comfortable eight-wicket win over hosts England in the first of the three Twenty20 Internationals. Rahul, who came in at one-down instead of captain Virat Kohli, grasped the opportunity by stroking his way to 101 not out off 54 balls as India overhauled England's score of 159 for eight without much fuss at Old Trafford. After reaching the three-figure mark, Rahul did the dab celebration before a joint-celebration with skipper Kohli. Following India's win, KL Rahul, in an interview with teammate Dinesh Karthik, revealed that Portuguese football star Cristiano Ronaldo was the inspiration behind the celebration with Kohli.

Giving some insights on his celebration styles, Rahul said: "By the end of the England series, I want to have a different handshake with all the members in the team right now. I have one with Hardik (Pandya). With Virat you saw it."

Karthik asked if the celebration was taken out from (Cristiano) Ronaldo, to which Rahul replied, "Yea, sort of. You know Virat's a huge Ronaldo fan".

It was only apt that Rahul and Kohli did the Ronaldo-esque celebration in a city where the Portugal star became a global star. Ronaldo joined Manchester United as an 18-year-old after a 12 million-pound move from Sporting Lisbon.

Ronaldo made 196 appearances for Manchester United, scoring a whopping 84 goals and registering 34 assists before moving to Spanish giants Real Madrid.

Meanwhile, India's performance in the first T20I is a perfect start to the long series against England. However, it wasn't going all India's way after Kohli won the toss and elected to field.

Jason Roy and Jos Buttler gave the hosts a brilliant start but Kuldeep Yadav put a brake on the proceedings with some high-quality spin. The left-arm spinner took five wickets and gave away 24 runs as England fell from 95 for two 117 for six. David Willey's cameo towards the end gave England's total some respectability.

India cantered in the chase despite losing Shikhar Dhawan (4) early. Rohit Sharma (32) and Rahul put on 123 runs for the second wicket to bat the hosts out of the game. Skipper Kohli added the finishing touches with a 22-ball 20 as India reached 163 for two in 18.2 overs.

Cristiano Ronaldo England vs India, 1st T20I England vs India, 2018 Cricket
Get the latest updates on IPL 2021, check out the IPL 2021 Schedule and Indian Premier League Live Score . Like us on Facebook or follow us on Twitter for more sports updates. You can also download the NDTV Cricket app for Android or iOS.