With India staring down the barrel, all-rounder Hardik Pandya thinks that both the teams batted in vastly different conditions and that is the reason the visitors conceded a big lead at Lord's. 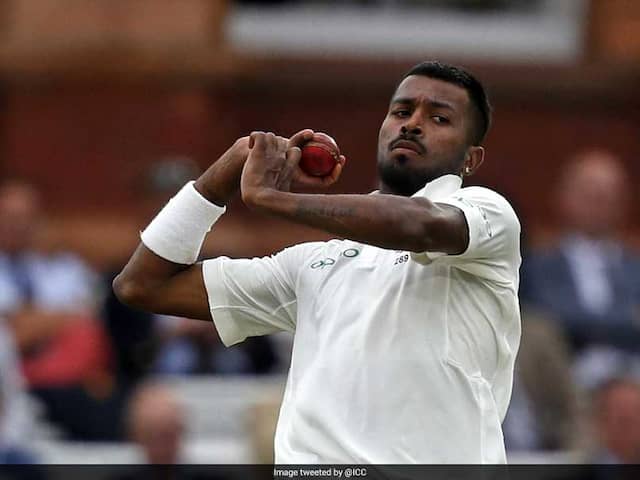 England all-rounder Chris Woakes hit his maiden Test century on the third day of the second Test against India as the hosts took a formidable first innings lead of 250 runs. Woakes scored an unbeaten 120 while Jonny Bairstow got 93 to take England from 131/5 to 320/6 as the hosts were 357/6 at stumps. The sixth-wicket stand of 179 between Bairstow and Woakes put England in an ideal position to win the Lord's Test and take a 2-0 lead in the series. With India staring down the barrel, all-rounder Hardik Pandya thinks that both the teams batted in vastly different conditions and that is the reason the visitors conceded a big lead at Lord's. Pandya, who denied Bairstow a sixth Test hundred, said India's bowlers tried their best but struggled once the ball stopped swinging. "Nothing happened (after lunch). That was the problem. As a bowling unit, we tried but all of a sudden the ball stopped swinging and they - Woakes and (Jonny) Bairstow - took the game away," Pandya told PTI.

"It happens - I've seen in Tests. You get four or five wickets quickly and then you get one partnership. Even with our batting line-up, it has happened many times. It's just a part of the game," Pandya said.

India were bundled out for 107 in just 35.2 overs on the second day and England further piled on the misery by reaching 357/6 - a score that reflected the vast change in conditions, Pandya said.

"Any team would have got the same score which we got because playing in those conditions (was tough), a little drizzle was there, and wicket got a little wet as well.

"Today the conditions were different. When we bowled today, there was proper sunlight. The wicket was the ideal one, which we would have expected on the first day. But because of the conditions, the pitch started doing a lot."

Heavy rain is expected for much of Sunday. Although bad light ended play early and spared India further punishment, the visitors will need a much-improved batting performance if they are to save the match.

India Cricket Team Hardik Pandya Lord's, London England vs India, 2018 Cricket England vs India, 2nd Test
Get the latest Cricket news, check out the India cricket schedule, Cricket live score . Like us on Facebook or follow us on Twitter for more sports updates. You can also download the NDTV Cricket app for Android or iOS.