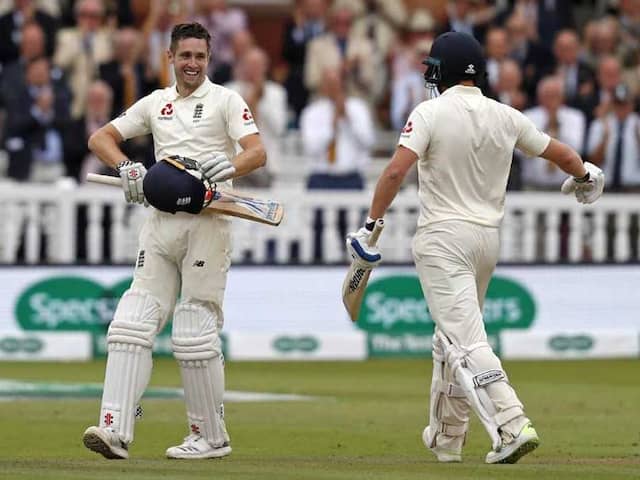 Chris Woakes marked his return to Test cricket with a fantastic maiden century handing England a massive advantage over a beleaguered India in the second match on Saturday. Woakes struck a polished ton as England finished day three in a dominant position, reaching 357 for six when bad light stopped play at the Lord's. Woakes walked off unbeaten on 120 runs with Sam Curran batting on 22 not out. England led by 250 runs and a day after bowling out India for 107, the English duo of Woakes and Jonny Bairstow showed the way to the visiting batsmen as to how to bat on this wicket, even though the strip eased out considerably. Woakes came into the game after an injury-induced break and as a replacement for the in-form Ben Stokes.

Post tea, Woakes and Bairstow (93) took their sixth-wicket partnership to 189 runs. They scored at a quick clip as Indian shoulders dropped and their spirits sank.    There was almost no fight as both batsmen marched towards their centuries in style. Woakes got there first, off 129 balls, as their 150-partnership came in just 219 deliveries.    Bairstow slowed down with the landmark in sight and paid the price for it with Hardik Pandya (2-66) nabbing him just short of three-figures. Dinesh Karthik took a diving one-handed catch to the right to dismiss him.

Curran then came to the crease and started smacking the ball around. India took the second new ball as soon as it was due, but the players went off for bad light after just one over.    Earlier, Bairstow and Jos Buttler (24) took their fifth-wicket partnership to 42 runs. England crossed 100 in the 27th over, even as Mohammed Shami (3-74) and Ishant Sharma bowled brilliant spells.

Both batsmen played and missed a lot, with Bairstow in particular searching for timing as he played quite a few inside-edges that missed his stumps. Shami finally got the breakthrough for India as he trapped Buttler plumb lbw in the 32nd over. With a lot of cloud cover, India still had hopes of reversal in this match at that point.

But Bairstow-Woakes defied them as the visitors severely missed a third full-time pacer to back up Shami and Sharma. Pandya tried but couldn't assert himself on the proceedings while Kuldeep Yadav was taken for easy runs.    In doing so, Bairstow brought up his 19th Test half-century off 76 balls. Soon afterwards, Woakes did the same and reached his fifth Test half-century off 71 balls. England crossed 200 in the 49th over even as Ravichandran Ashwin (0-23) failed to provide any breakthrough. Once the lead crossed 100, Indian fielders' shoulders dropped and they played for the tea break.

This was after India put in a hard grind as England were reduced to 89 for four at lunch.    Conditions changed drastically as the sun came out with not a hint of rain around. Moisture, both in the air and on the surface, dried up quickly as batting seemed a lot easier. Even so, the ball continued to do something as Sharma and Shami began proceedings for the day. They took a couple overs to find the proper line and length to bowl at the two left-handed opening batsmen.

Shami troubled the batsmen more in this opening spell, with Sharma finding more impact as he changed lines to come around the wicket. The breakthrough came in the eighth over as Shami trapped Keaton Jennings (11) lbw, with England losing a pointless review.    It became a double blow as five balls later Alastair Cook (21) was caught behind off Sharma and the hosts were reduced to 32-2.    Joe Root (19) and 20-year-old debutant Olliver Pope (28) then added 45 runs for the third wicket. Some shoddy bowling from Yadav and an ordinary first spell from Pandya helped the batting duo, as the score crossed 50 in the 14th over.

Surprisingly, Ashwin didn't get to bowl in the first session. But after skipper Virat Kohli had a chat with Pandya, he tightened up his line to the batsmen and became much more effective.

He then went on to trap Pope lbw in the 22nd over, as England lost their second review as well.

The big blow of the morning came at the stroke of lunch as Shami returned to pick up Root, trapping him lbw. There were no reviews left, but England's most important batsman was out plumb anyway as India roared back into contention. England lead the five-match series 1-0.

Mohammed Shami England vs India, 2018 Lord's, London Cricket
Get the latest Cricket news, check out the India cricket schedule, Cricket live score . Like us on Facebook or follow us on Twitter for more sports updates. You can also download the NDTV Cricket app for Android or iOS.