India vs England: Alastair Cook Reveals He Had Retirement On Mind For Last Six Months

Alastair Cook is set to retire at the end of the ongoing five-match Test series against India. 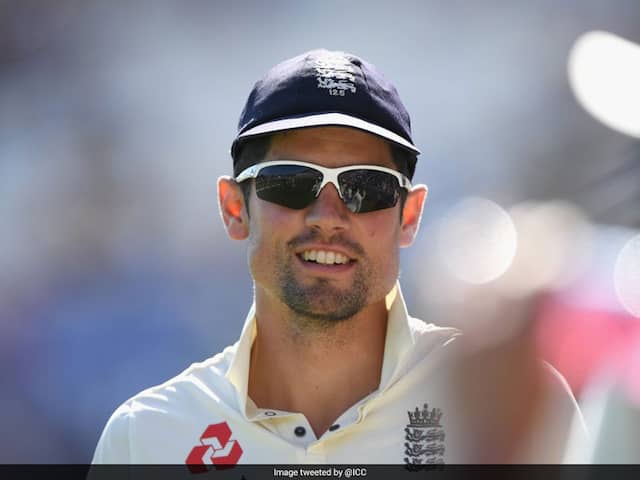 Alastair Cook will leave the game as England's most decorated player.© Twitter

Former England skipper Alastair Cook on Monday announced that he will retire from international cricket following the fifth and final Test against India that will begin at the Kennington Oval in London from Friday. In his first media interaction since the announcement, Cook revealed that he had considered hanging his boots for the last six months before finally announcing the end of his international career. "It's hard to put it into words but over the last six months there have been signs in my mind this was going to happen," Cook said.

"I always had been mentally tough and had that edge to everything I've done and that edge had kind of gone."

Cook informed captain Joe Root before the game and head coach Trevor Bayliss while it was going on, but the rest of the squad found out in a beer-fuelled emotional speech afterwards.

"I told Rooty before the game and then told Trevor during the game," Cook said.

"I was a couple of beers in, which I needed to be, otherwise I would have cried more than I actually did. I managed to hold it together.

"At the end of the game I said, 'It might be good news, it might be sad for some, it might be happy for others but it's time and I have done my bit. I will play one more game'.

"There was a little bit of silence, then Mo (Ali) said something, everybody laughed and then it was forgotten about."

Cook will leave the game as the country's most decorated player, having maximised his talent to its fullest.

"I can look back and say, I became the best I could become, that actually means quite a lot to me," he said.

"I have never been the most talented cricketer, I don't pretend I was, but I definitely think I got everything out of my ability.

"Everyone was talking as if I'd died. It's nice when you hear so many nice words said about you. The last couple of days I have been back at home but I had a look last night.

"Hopefully this week can go well, score some runs and then I can go."

England Cricket Team Alastair Cook England vs India, 2018 Cricket England vs India, 5th Test
Get the latest updates on IPL 2020, check out the IPL Schedule for 2020 and Indian Premier League (IPL) Cricket live score . Like us on Facebook or follow us on Twitter for more sports updates. You can also download the NDTV Cricket app for Android or iOS.