England all-rounder Ben Stokes took two wickets in an over, including the prize scalp of India captain Virat Kohli for 53 before ending the match when he had Hardik Pandya (31) caught at first slip by Alastair Cook. 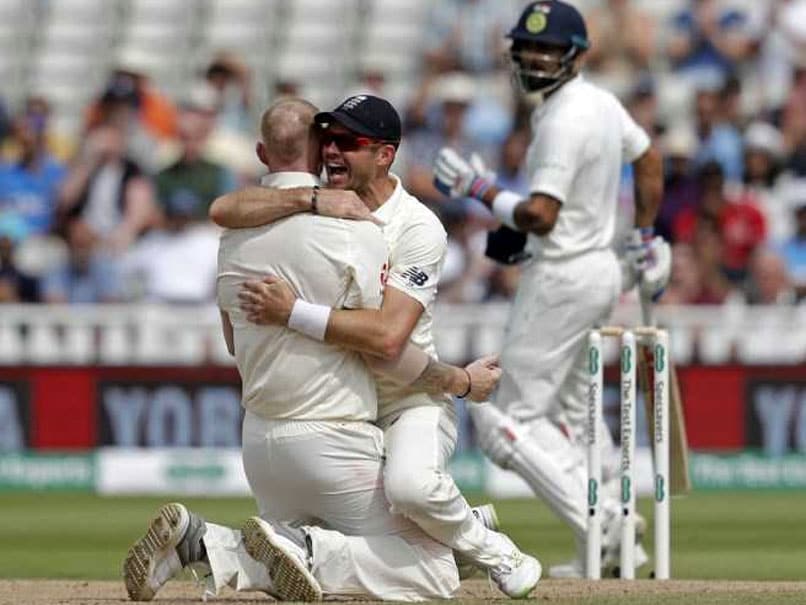 The series continues with the second Test at Lord's starting on Thursday.© AFP

India suffered a heartbreaking 31-run loss to England as skipper Virat Kohli's heroics went in vain amid yet another abject batting capitulation in a riveting opening Test at the Edgbaston today. It was virtually Kohli versus England and when the Indian captain was trapped lbw off Ben Stokes in the 47th over, the absorbing game was only heading the home team's way. Resuming on overnight 110 for five, India folded up for 162 in 54.2 overs despite Kohli's combative 51 off 93 balls and Hardik Pandya's 31. All-rounder Stokes (4-40) came to the party on the morning of day four by removing Kohli and Mohammad Shami in the same over. James Anderson (2-50) and Stuart Broad (2-43) took a brace each as England drew first blood in what promises to be an engrossing five-match series. The Indian bowlers did their job in both the innings but the batsmen, with the exception of Kohli, let the team down again. The second Test begins at Lord's on August 9.

The sun was out at Edgbaston but the ball was doing enough to trouble the batsmen. India got off to a poor start as Dinesh Karthik (20) fell on the sixth ball of the day, caught at second slip off Anderson.    '

It brought Pandya to the crease, but Kohli was not yet ready to farm strike and trusted his partner. It meant that Pandya hogged majority of the deliveries early in their partnership, but the skipper didn't mind.

Kohli only faced six balls in the first 15 minutes of play, but Pandya grew in confidence as the duo put on 29 runs for the seventh wicket as he struck some lusty blows off Broad.

The skipper reached his 17th Test half-century off 88 balls. Thanks to those boundaries off Pandya, the bowling changes came and they worked for England. In the 47th over then, Stokes trapped Kohli lbw as the batsman moved too far forward and across to counter the incoming delivery.

The skipper did check for DRS review but it went in England's favour. Surprisingly, Shami (0) came out to bat next and Stokes made it a double blow in four balls as the batsman was caught behind.

Ishant Sharma (11), who has a county half-century this summer, came down as low as number ten, and looked more comfortable than Shami immediately. Two fours off his blade meant that England had to rethink their plans once again.

Adil Rashid (1-9) then was brought on after the drinks break and for the second time in this Test, he trapped Sharma lbw with a googly.

At nine down, it was but a matter of time even as Pandya tried to stay at the wicket and fight until the very end. He tried rotating strike with Umesh Yadav and attacked Rashid as well.

But Stokes, who might not play the second Test owing to his court case, managed to nick out the edge England wanted. Pandya was caught at first slip to signal India's defeat in a seesawing Test.

On day one, Joe Root's 80 runs helped England score 287 runs in their first innings. On day two, Kohli scored a masterful 22nd Test hundred to rescue India from 169-7 as they finished with 274 in reply. On day three, Ishant's 5-51 saw England bowled out for 180 runs and setting up a 194-run target.