Lance Armstrong could face US legal action after confession

The interview was Armstrong's first since he was stripped of his Tour de France titles and came after more than a decade of vigorous denials that he had used banned substances to win his way into the history books. 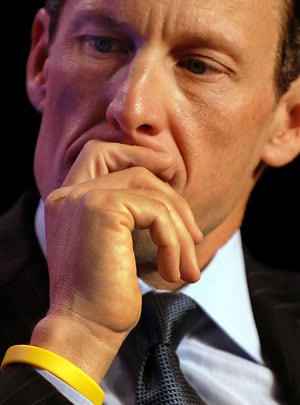 The US government can take Lance Armstrong to court once the fallen cycling hero publicly admits to doping, experts and people familiar with the matter say.

Armstrong is said to have come clean about his use of performance-enhancing drugs in an interview with Oprah Winfrey set to air on Thursday, his first interview since being stripped of his seven Tour de France titles last year.

Until now Armstrong, 41, had strenuously denied doping allegations for several years, even after a 1,000-page report by the US Anti-Doping Agency put him at the heart of the greatest doping scandal in the annals of cycling.

"Because he has now admitted he doped, that makes it a lot easier to prove a fraud claim," said sports lawyer Brian Socolow.

"Given that he has now said that he did use performance-enhancing drugs, the government is given the opportunity to reopen an investigation."

Peter Keane, a law professor at Golden Gate University, said Armstrong could face criminal prosecution over the government sponsorship he received while riding on the US Postal team from 1998-2004.

The interview was Armstrong's first since he was stripped of his Tour de France titles and came after more than a decade of vigorous denials that he had used banned substances to win his way into the history books.

In terms of potential criminal charges, the case has enough of a high profile for the government to consider prosecuting Armstrong for fraud, over millions of dollars of public sponsorship, and for perjury, after his denials under oath, according to Socolow of New York firm Loeb & Loeb.

In terms of civil charges, the Justice Department has until Thursday to join a lawsuit filed in 2010 by Armstrong's former teammate Floyd Landis to recuperate public funds disbursed to his US Postal team, a source close to the matter said.

A court document shows that Landis's complaint has recourse to the False Claims Act, allowing an individual to file a lawsuit against someone else or against a company for having lied to the federal government.

The text allows the accuser to pocket 15 to 30 percent of the funds recuperated by the government.

The government spent more than $30 million sponsoring US Postal, according to The Wall Street Journal. Experts say the government can seek three times that amount.

The Justice Department refused comment on any possible lawsuits, whether civil or criminal. But a source close to the matter said there was no risk of criminal prosecution.

Experts, however, say criminal charges could come if Armstrong admits to more than just doping and confesses to distributing performance-enhancing drugs.

"I don't think the government -- or a majority of the American people -- have the stomach for a criminal suit," in light of Armstrong's widespread popularity, said Jordan Kobritz, who chairs the Sport Management Department at the State University of New York at Cortland.

The government has had lackluster success with perjury cases against athletes who testified under oath about using illegal drugs, Socolow said.

It has spent millions of dollars in seeking to prosecute former baseball stars Roger Clemens and Barry Bonds, with meager results.

A statute of limitations bars lawsuits for perjury more than five years after declarations made under oath. And there are contradictory reports as to when Armstrong made his declarations, with the oldest dating back to 2005.

However, "the government could investigate him for obstruction of justice if he misled the grand jury investigation last year," said Michael McCann, set to head a new Sports and Entertainment Law Institute at the University of New Hampshire this fall.

Experts agree that Armstrong likely clinched an out-of-court agreement with the government before speaking to Oprah.

"I'm sure his attorneys reviewed the potential impact an 'admission' would have in all existing legal matters against him and all possible suits that could result from his admission," said Kobritz.

Armstrong "will return either voluntarily or by force of law millions of dollars of sponsors fees," predicted Socolow.

In addition to government prosecution and the Landis case, Armstrong could face several civil complaints.

In Texas, sports insurer SCA wants to recoup at least $7.5 million in performance bonuses paid to Armstrong in 2006 for multiple Tour victories.

The Sunday Times of Britain has sued him for more than Â£1 million ($1.6 million) over a 2006 libel payment.

It had paid Armstrong Â£300,000 to settle a libel case after publishing a story suggesting he may have cheated, and now wants that money, plus interest and legal costs, repaid.

And Livestrong donors may demand compensation after Armstrong's admission. The foundation has raised more than $500 million since the cyclist founded it in 1997.