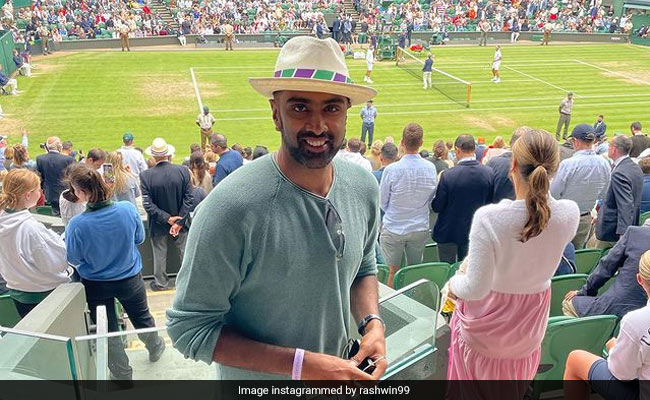 Away from cricket, India spinner Ravichandran Ashwin was spotted enjoying live tennis on Monday at the Wimbledon 2021. Ashwin also shared his excitement to watch the game live by sharing a snap from his visit to Henman Hill on Instagram. "Still high on tennis from yesterday," Ashwin captioned the picture. He termed the experience as a "dream come true." The Delhi Capitals (DC) cricketer also used the hashtag "Wimbledon 2021". Responding to the post, Ashwin's wife, Prithi Narayanan poked fun at the spin wizard as she wrote, "cough".

In another uploaded, on his Instagram from the same venue, Ashwin could be seen posing with a spectator and captioned it, "At the Henman Hill."

Henman Hill is an amphitheatre outside the courts in Wimbledon. Named after Tim Henman, the Briton who made it to four Wimbledon semi-finals, the area has a large TV screen where people enjoy the matches.

Ashwin's former India and Chennai Super Kings (CSK) teammate Subramaniam Badrinath was among the first few to comment on the post.

Fans also shared their excitement as they dropped red-heart and smiling face heart-eye emojis in the comment box of the post.

A few even asked the Indian ace about the match, he was watching. "Which Wimbledon match are you watching sir?" the user asked.

"Who is your favourite tennis player of all time, Ash?" questioned another.

Ashwin was last seen in action during the World Test Championship (WTC) final between India and New Zealand at the Rose Bowl Southampton.

Ashwin picked four wickets (both innings combined) and scored a valuable 22 runs in the first innings as India lost the match by eight wickets.

Ashwin will return to field duties next month when India will take on England in a five-match Test series. At present, Ashwin along with other members of India's England squad are enjoying a three-week break from the bio-bubble and cricket.