MS Dhoni and Sachin Tendulkar got together for an ad shoot. The pictures of the meeting between the two cricketers has sent fans down the memory lane. 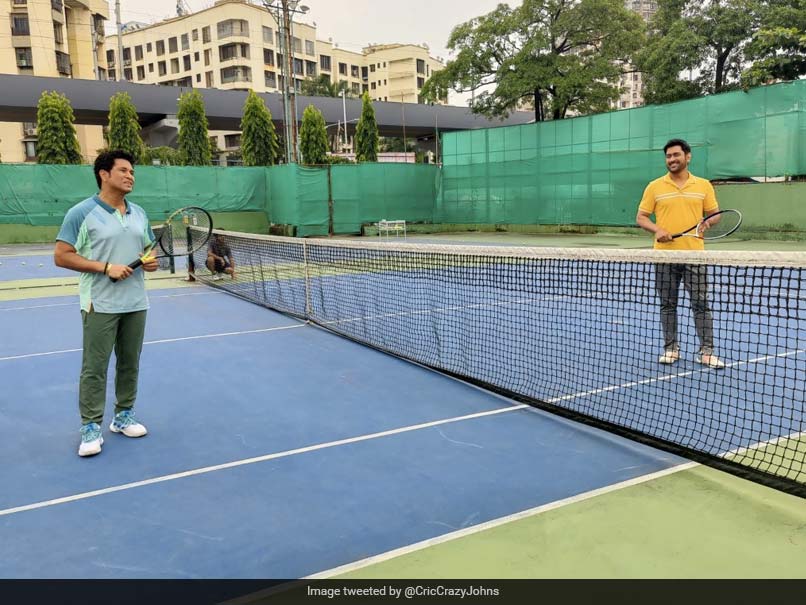 Two of the finest players to ever grace the game of cricket, MS Dhoni and Sachin Tendulkar haven't shared the cricket field with each other a long time ago. The two iconic cricketers got together again, this time on a tennis court, but only for an ad shoot. In a video that has surfaced on social media, Dhoni and Tendulkar could be seen posing for pictures over a game of tennis.

Seeing two of the finest servants of Indian cricket on the tennis court, however, fans were wondering as to what they really plan to unfold.

“When we were growing up, we used to watch Sachin (Tendulkar), he was like God to all of us. He had that aura around him,” Dhoni said.02-Sept-2015 https://t.co/xGlMmncN05

Sachin Tendulkar & MS Dhoni are bigger than cricket
2 of the greatest cricketers ever to ever hold a bat https://t.co/N0zV55kiBU

Both Dhoni and Tendulkar hold the reputation of legends in Indian cricket. Over the years, Dhoni played a whopping 90 Tests, 350 ODIs and 98 T20Is for India. Sachin, on the other hand, wore the national team's jersey in 200 Tests, 463 ODIs and 1 T20I.

Sachin and Dhoni have also done wonders in the Indian Premier League, playing for Mumbai Indians and Chennai Super Kings respectively. While Sachin's playing career is far behind him, Dhoni still remains an active cricket in the IPL. Despite being 41 years old, Dhoni has remained an active cricketer who can still win games for his team.

Dhoni will be seen donning the Chennai Super Kings jersey in the IPL 2023 season. Tendulkar, on the other hand, was recently a part of the Road Safety World Series where he did roll back the years, producing some memorable shots throughout the tournament.