Michael Bracewell covered good ground before putting a sensational dive to his right and taking a stunning catch. New Zealand won the game by 50 runs. 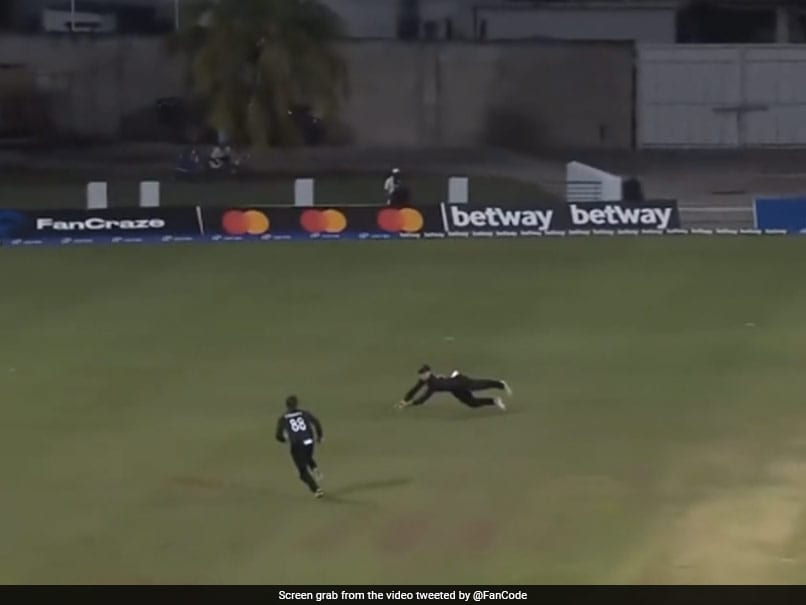 New Zealand defeated West Indies by 50 runs in the rain-affected second ODI match between the sides at Kensington Oval, Barbados on Friday. Given that the guests were trailing 0-1 in the three-match series, it was a much-needed victory for them. Finn Allen was their star on the match day as he scored 96 runs to take the side to 212 before it got bundled out. Meanwhile, Michael Bracewell also hogged limelight, not for his batting or bowling but for a sensational catch he took in the match.

Bracewell was fielding at mid-on when West Indies batter Brandon King hit a Tim Southee delivery to his right. The Kiwi all-rounder covered good ground before putting a sensational dive to his right and taking a stunning catch. That of King was the third wicket of West Indies to fall and his departure saw them reeling at 21 for 3 in 7.4 overs.

Talking about the match, Southee and Trent Boult combined to demolish the West Indies top-order batting as New Zealand scored a series-levelling victory.

After Allen's crucial knock for New Zealand, Southee and Boult claimed four and three wickets, respectively, to keep West Indies at bay since the start of the latter's innings. Meanwhile, Mitchell Santner and Glenn Phillips also claimed a wicket each to help the guests' cause.

The sides face each other next for the deciding ODI on August 21 at the same venue. It is worth noting that New Zealand won the three-match T20I series 2-1 that was played between the sides before the ODIs.

West Indies Cricket Team West Indies vs New Zealand, 2nd ODI Michael Bracewell
Get the latest updates on Fifa Worldcup 2022 and check out  Fifa World Cup Schedule, Stats and Live Cricket Score. Like us on Facebook or follow us on Twitter for more sports updates. You can also download the NDTV Cricket app for Android or iOS.