Pakistan pacer Haris Rauf has certainly won the top prize as far as wicket celebrations go, following his antics on Tuesday in the Big Bash League. 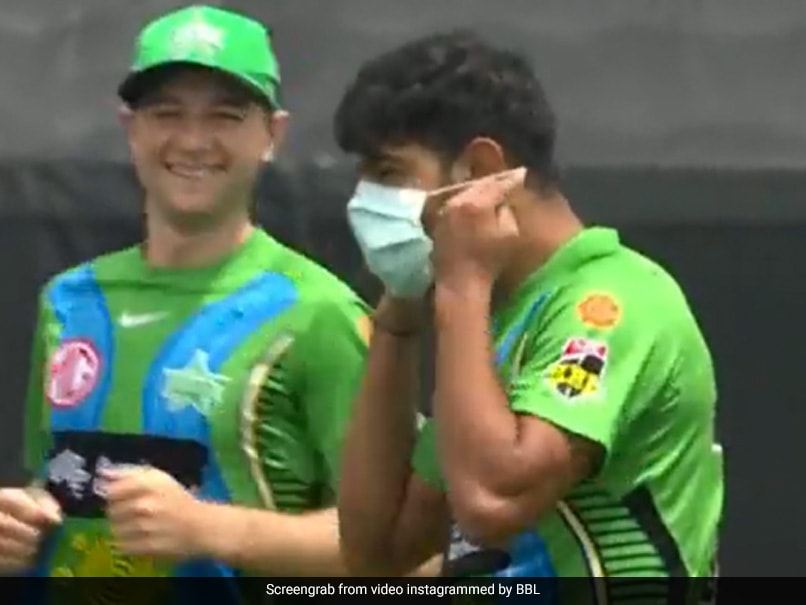 BBL: Haris Rauf took out a mask from his pocket and put it on after taking a wicket.© Twitter

Over the years, footballers have made it a habit of coming up with innovative ways to celebrate after scoring a goal. Cristiano Ronaldo's "Siuuu" celebration has become a rave not just among football fans but the entire world. So much so that even Indian pacer Mohammed Siraj had copied it after taking a wicket in South Africa. In this aspect, cricketers are lagging a bit with original, quirky celebrations a rare sighting on a cricket field. Brett Lee and Imran Tahir did try to do something original after taking a wicket, which made for great viewing. However, Pakistan pacer Haris Rauf has certainly won the top prize as far as wicket celebrations go, following his antics on Tuesday in the Big Bash League.

With the Omicron variant create havoc across the world, his celebration also sent out a loud and clear message to all.

The Pakistan bowler, who is playing for Melbourne Stars in the BBL, dismissed Perth Scorchers opener Kurtis Patterson in the third over and what followed was just brilliant.

After taking the wicket, Rauf acted as if he was sanitising his hand, and then actually whipped out a mask from his pocket and put it on.

"That's a celebration I have never seen before," said the on-air commentator.

Despite the early setback, the Scorchers bounced back in style. Nick Hobson and Laurie Evans added 83 runs for the second wicket off just 55 balls.

Robson fell victim to Adam Zampa for 46 but Evans went on to notch a half-century, finally dismissed by Rauf for 69 off 46 balls.

Scorchers captain Ashton Turner took centrestage as his 26-ball 47 not out helped the team post 196/3 in their 20 overs.

Rauf finished with two wickets but was plundered for 38 runs off his four overs.

Pakistan Cricket Team Haris Rauf Cricket
Get the latest updates on SA vs IND 2021-22, check out the Schedule and Live Score . Like us on Facebook or follow us on Twitter for more sports updates. You can also download the NDTV Cricket app for Android or iOS.