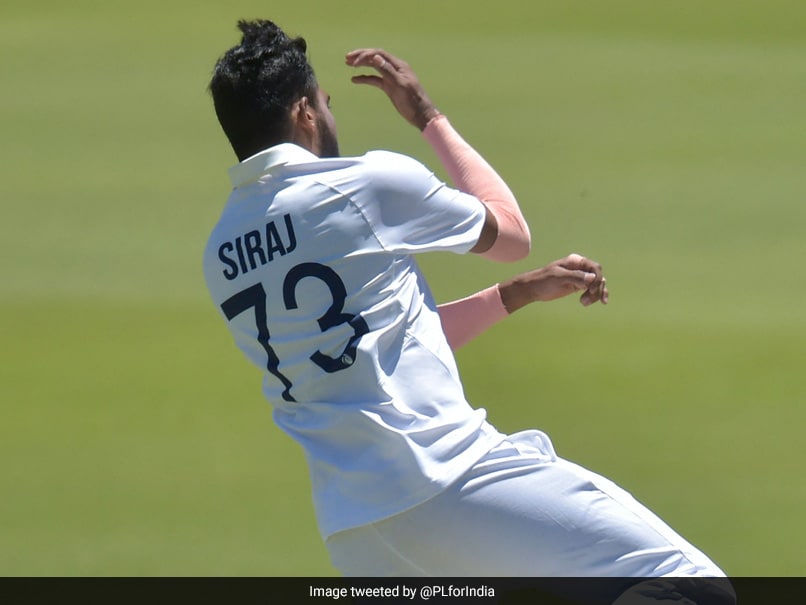 SA vs IND: Mohammed Siraj did a Cristiano Ronaldo celebration after claiming a wicket.© Twitter

India bowled themselves in the driver's seat on Day 3 of the first Test versus South Africa at the Centurion as they dismissed the hosts for a score of 197 runs in reply to their first innings total of 327. The 130-run lead gave India a perfect cushion as they aim to set a daunting target for the Proteas. India's pacers fulfilled their responsibilities impeccably and shared all ten wickets amongst themselves. Apart from a brilliant five-wicket haul by Mohammed Shami, other fast bowlers including Jasprit Bumrah, Shardul Thakur and Mohammed Siraj also contributed to the downfall of the South African batting line-up.

With plans falling in place for the Virat Kohli-led side, Siraj enjoyed his day out as he decided to go off script and celebrate his only wicket of Rassie van der Dussen with footballer Cristiano Ronaldo's trademark celebration. Siraj got the batter to knick one to Ajinkya Rahane in the slips and executed the star footballer's Siu celebration.

Ronaldo's influence is so unreal pic.twitter.com/DRC4ZjRoBF

Portugal and Manchester United footballer, Ronaldo has a unique way of celebrating goals. Here's the goal celebration which Siraj tried to bring in on the Centurion pitch.

Here's how the Premier league reacted to Siraj's celebration:

The celebration has reached the @BCCI camp in South Africa pic.twitter.com/VLELTNhPbM

The way the Indian celebrated each wicket reflected an extremely positive attitude in a crucial phase of the opening Test.

However, the home team did make certain inroads as they saw the back of Mayank Agarwal before Stumps on Day 3 to end with a lead of 146 runs.

KL Rahul was at the crease and was joined in by Shardul Thakur before the end of day's play.

Cristiano Ronaldo Football English Premier League
Get the latest updates on ICC Women's Cricket World Cup 2022 and IPL 2022, check out the Schedule , Live Score and IPL Points Table. Like us on Facebook or follow us on Twitter for more sports updates. You can also download the NDTV Cricket app for Android or iOS.