An old video of mother saving her son from being crushed by a truck resurfaced on social media with England cricketer Jofra Archer reacting to it. 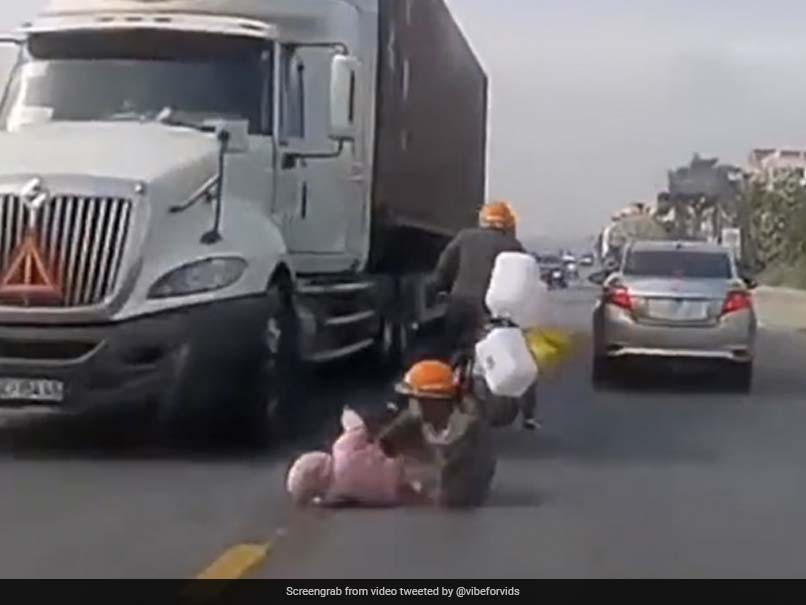 In the video, three people can be seen travelling on a motorcycle when they were clipped by a car.© Twitter

A 2019 video of mother saving her son from being crushed by a truck resurfaced on social media with England cricketer Jofra Archer reacting to it. In the video, three people can be seen travelling on a motorcycle when they were clipped by a car. While the rider remained seated, mother and son fell off the bike, rolling straight into the path of an incoming truck. The mother then shows lightning reactions to pull her child back towards her and away from the wheels of the truck just in the nick of time. According to Daily Mail, the incident took place in  Goi, Nam Dinh in Vietnam.

Reacting to the video which was posted on Twitter on Monday, Archer wrote: "Mother of the year".

Mother of the year https://t.co/qIZlz1PYEZ

Coming to Archer, the England cricketer has been sidelined after undergoing two surgeries to treat his troubled right elbow.

The right-arm fast bowler was bought by Mumbai Indians for a whopping Rs 8 crore in the IPL mega auction, knowing very well that he would be unavailable for the 2022 season.

Having sat out IPL 2022, Archer is continuing his recovery but spoke about his new IPL team

"MI looks very close-knit and family-oriented and such teams always do well. That's why it is no surprise that we have won five titles," Archer told the team's official social media handles.

"Polly's (Kieron Pollard) been there 10 years, (Lasith) Malinga was there a long time, the same with Rohit (Sharma) too. These things make you feel safe when you come into the team as a new player," Jofra said.

When Archer does make an appearance for MI, it will be the second team he will play for in the IPL after Rajasthan Royals, where he spent three seasons.

Jofra Archer Cricket
Get the latest updates on India vs South Africa and check out  Schedule, Results and Live Score. Like us on Facebook or follow us on Twitter for more sports updates. You can also download the NDTV Cricket app for Android or iOS.