Watch: Mumbai Indians' Trent Boult, Ishan Kishan Take On Each Other In "Cross The Bottle" Challenge

Mumbai Indians shared a video on their official Twitter handle of the duo taking on each other. 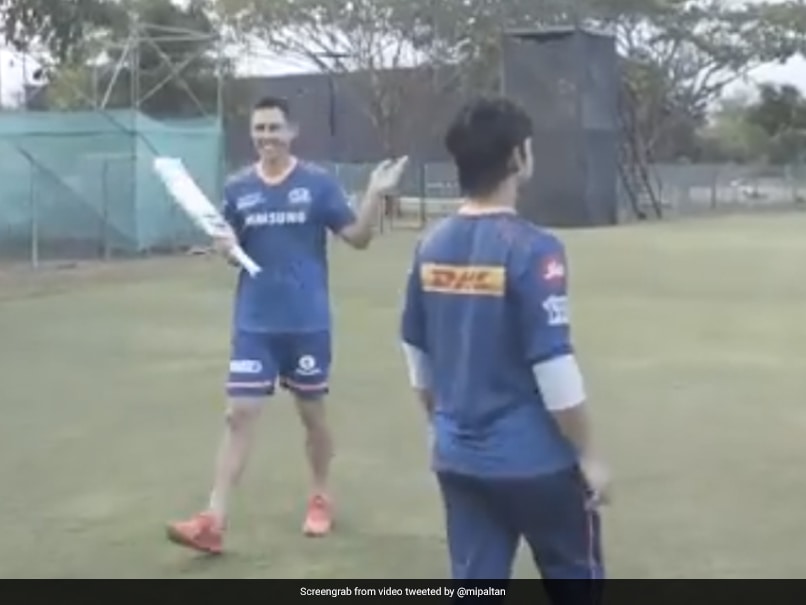 Ishan Kishan and Trent Boult took on each other in the "cross the bottle challenge".© Instagram

Mumbai Indians (MI) cricketers Ishan Kishan and Trent Boult took on each other in the "cross the bottle challenge", in a new video shared by the Indian Premier League (IPL) franchise. However, there was a role reversal for the duo as young batting star Ishan Kishan was bowling and the ace New Zealand seamer, Boult, was batting. Kishan gave the Kiwi cricketer three chances to clear the bottle but he failed to do so. In the process, Kishan won the challenge, 3-0. Before the start of the game, Kishan was also seen warning Boult about the pitch, saying it is "not New Zealand, it's India, the wickets are slower here".

Kishan also convinced Boult to practice hitting sixes off his bowling and the Kiwi cricketer pointed out that he cannot have a fine-leg up, inside the circle. Boult even went on to mock Kishan, saying that "these tattoos don't make you tough".

The video of the same was shared by Mumbai Indians on their official Twitter handle.

"Ishan Kishan vs Trent Boult, with a twist. Watch to know who wins the ‘Cross The Bottle' challenge," MI captioned the video.

During their discussion, Boult insisted that while bowling the slower ball, "everyone tries to bowl here and I just go smacking". And when Kishan pointed out that he had never seen Boult play that shot ever, the New Zealander did not look convinced.

Kishan gave Boult two more chances to clear the "bottle" after he failed in his first attempt. But Boult was not able to do so. However, the Kiwi cricketer had a perfect excuse for every failed attempt.

In the end, when the cameraperson asked Kishan about the challenge, he said that he was giving "bowlers some confidence for the match. If he gets to bat in the end overs, maybe he can smack one for us. And Boulty, he's full of confidence".

The Board of Control for Cricket in India (BCCI) had postponed the Indian Premier League after the bio-bubble was breached and many players and support staff tested positive.

Boult and Kishan were part of the MI squad before they disbanded and everyone returned home. Mumbai were sitting at the fourth spot on the IPL table with eight points in their kitty when the mega event was postponed.

Trent Boult IPL 2021 Cricket
Get the latest updates on SA vs IND 2021-22, check out the Schedule and Live Score . Like us on Facebook or follow us on Twitter for more sports updates. You can also download the NDTV Cricket app for Android or iOS.