"Umpire And I Got Death Threats For Ages": Tim Bresnan On Dismissing Sachin Tendulkar At Oval

Tim Bresnan said that umpire Rod Tucker even had to step up his security due to the death threats. 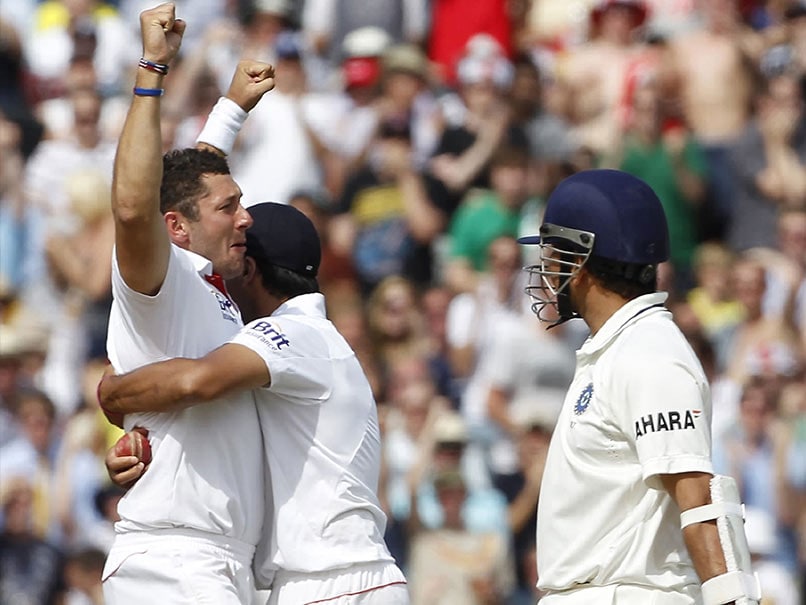 Tim Bresnan dismissed Sachin Tendulkar for 91 during the 2011 Test at The Oval.© AFP

England fast bowler Tim Bresnan has revealed that he and Australian umpire Rod Tuckerboth received death threats after taking Sachin Tendulkar's wicket on 91, denying his 100th international century, during the 2011 Test at The Oval. "This ball, it was probably missing leg anyway, and umpire Hill (Tucker), Aussie lad, shot him out. He was on 80-odd as well [91], definitely going to get it (his century). We win the series and go to number one in the world," Bresnan said on the 'Yorkshire Cricket: Covers Off' podcast.

"We both got death threats, me and this umpire, we got death threats for ages after. I got them on Twitter and he had people writing to him to his home address and stuff, getting proper death threats going -- 'How dare you give him out? It was a missing leg," he added.

According to Bresnan, Tucker had to step up his security due to the death threats.

"I caught up with him a few months later and he was like, 'Mate, I've had to get a security guard and stuff.' He had police protection around his gaff in Australia," the 35-year-old said.

Tendulkar had to wait for quite some time to achieve the unique feat of 100 centuries as he went without scoring a ton in four outings in the 2011 World Cup and also missed the West Indies tour.

The right-handed batsman completed his 100th ton against Bangladesh in 2012and became the only batsman in the world to do so.

Tendulkar made his debut in the Test cricket on November 15, 1989. In the same year on December 18, he played his first ODI match.

The cricketer has the most number of runs in the longest format of the game, amassing 15,921 runs. Along the way, Tendulkar scored 51 Test centuries, most by any player.

Things are no different in ODI cricket as Tendulkar tops the list of most runs in this format as well. He has accumulated 18,426 runs in ODI, which includes 49 tons.

The Oval, London
Get the latest updates on IPL Auction 2023 and check out  IPL 2023 and Live Cricket Score. Like us on Facebook or follow us on Twitter for more sports updates. You can also download the NDTV Cricket app for Android or iOS.