It was a bitter-sweet symphony at the Shere-Bangla stadium on Friday as despite a valiant century from Sachin Tendulkar - his 100th international ton - Bangladesh orchestrated a scintillating fightback to chase the target of 290 with 4 balls and 5 wickets to spare. 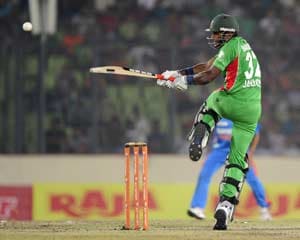 Mushfiqur Rahim and Shakib Al Hasan delivered an improbable win for Bangladesh that left Sachin Tendulkar's record 100th international century in the shade and threw the Asia Cup wide open. As the focus remained on Tendulkar's achievement for most of the match, Bangladesh did what they had threatened to do in the tournament opener against Pakistan - they showed that they could chase big totals under pressure against Test opposition.

Bangladesh had asked India to bat knowing that chasing has been easier on the Mirpur pitch in this tournament than batting first. Though the strategy had not worked, just about, against Pakistan, India did not have an Umar Gul or a Saeed Ajmal to stop a side hungrier than they were for success.

Shakib and Rahim did not succumb to the gnawing tension that an asking-rate of above eight runs an over brings. Instead, India's bowlers crumbled against their aggression. Shakib blitzed 49 off 31 deliveries and were it not for a close stumping decision going against him, might have finished the game on his own.

With 66 needed off 50 deliveries, Shakib was adjudged stumped off R Ashwin with replays showing enough doubt for the benefit to have gone to the batsman. Rahim, who had said yesterday that India's thin bowling unit gave Bangladesh confidence, slammed 46 off 25 as Bangladesh won with four deliveries left.

A steady build-up from Tamim Iqbal and Jahurul Islam had left Bangladesh with a climbing asking-rate. With Nasir Hossain in control at one end, Shakib gave Banngladesh hope with hitting that was as uninhibited as it was daring. He took 18 runs off the 37th over, bowled by Ashok Dinda, with a couple of swings over midwicket and thick edge to third man. R Ashwin dropped it short, and was punched and pulled for boundaries. It was now Irfan Pathan's turn. A slash followed another pull, and the momentum had shifted in Bangladesh's favour.

India managed to sneak in some quiet overs after Shakib fell. It came down to 37 needed off 24. India's quick bowlers were having problems in controlling their deliveries and full tosses had been dished out often. The 48th over was when it fell apart for them. Irfan bowled a wide outside off stump. MS Dhoni ran upto him with some advice. Irfan bowled a length ball on Mushfiqur's pads next. Flicked over deep square leg for six. A stern-looking Dhoni had more words for Irfan. A high full toss followed from around the wicket. Swung over deep midwicket for six more.

With 16 needed off 12, Praveen began the 49th over with a waist-high no-ball. Sliced over point for four. A length delivery followed. Mushfiqur wound up and dispatched it over long-on. Game over. Mushfiqur roared on the field; Shakib did an encore in the dressing room. Bangladesh had only their third ODI win over their big neighbours.

When Tamim and Jahurul were ensuring that Bangladesh did not lose too many wickets during the middle overs, it had seemed that Bangladesh were not far away from coming short against the stiff asking-rate. Tamim again displayed his recent penchant for buckling down to play a long innings while Jahurul picked up the scoring after a slow start. The duo kept getting the odd boundary but could not really dominate. They fell after their fifties, trying to keep up with the requirement, but Shakib and Mushfiqur stunned India with their refusal to give in.

Defeat would have been the last thing on India's minds when after a year of hype and expectation, Tendulkar got his 100th international century against and in the country where he had equalled Sunil Gavaskar's then-record 34 Test centuries in 2004 on way to his highest Test score. It wasn't one of Tendulkar's better hundreds and will ultimately be remembered only for being the one that brought up the unprecedented landmark. In fact, it was his second-slowest innings of 100-plus in ODIs and ended up restricting India's progress. They ended up on 289 for 5, an underwhelming outcome considering their power-packed batting line-up had had a platform of 173 for 1 in the 36th over.

Bangladesh's attack was persevering but limited. Tendulkar duly milked them to finally go past a landmark that hardly anyone knew existed before he got close to it, but put tremendous pressure on the player himself in a frenzied build-up that lasted a year.

Tendulkar had motored to 80 off 102 deliveries but took another 36 before he took his hundredth run, off Shakib Al Hasan. The monkey off his back, he belatedly took charge, hitting consecutive boundaries off Shahadat Hossain before a slog ended up in the keeper's hands. Tendulkar's departure came immediately after Suresh Raina's brisk innings had ended after having kept India going amid his senior partner's quest for the century. Raina hit 51 off 38 and built on a 148-run second-wicket partnership between Tendulkar and Kohli, who looked set to become the first India batsman to score three consecutive ODI hundreds until he played on for a breezy 66.

The hosts should have had Kohli first ball in the sixth over, when Shafiul Islam struck him on the back leg in front of middle stump, but umpire Paul Reiffel remained unmoved. Kohli's form took over after that, and with Tendulkar batting as safely as he does during some of his long Test innings, India motored along without giving Bangladesh half a chance more.

Bangladesh had themselves to blame for allowing Tendulkar to settle with a generous sprinkling of wide deliveries from their fast bowlers. His first four scoring shots were all boundaries, as he cashed in on width to drive and punch through the off side.

Shafiul did have Gautam Gambhir playing on early off a forcing flat-footed drive, but Kohli did not take long to get going after his reprieve. The field hardly moved as he flicked and cover-drove for fours in consecutive overs.

Spin was expected to be a major factor on a dry-looking pitch but Tendulkar and Kohli negotiated Bangladesh's slow army without any problems. The scoring-rate did take a slight beating as singles dominated but Tendulkar soon found the freedom to slog-sweep Shakib Al Hasan over wide long-on. With his feet moving precisely now, he made room to cart Shakib inside-out over extra cover to reach his first international fifty in 13 innings. As he passed 80, Tendulkar took his time amid some nerves. Meanwhile, after having contemptuously worked his way to another fifty, Kohli played on against Abdur Razzak.

Raina's slog-sweeps and lofted shots over extra cover kept the runs coming, though, but Tendulkar was clearly feeling the pressure at the other end. He played out a maiden to Mashrafe Mortaza on 83, and on several occasions, took off for non-existent singles before being sent back. The century arrived in the 44th over, and Tendulkar's relief was evident. With the innings in need of a final burst, Dhoni slammed 16 off the 50th over to get India to 289, but for once, Bangladesh chased with as much faith as their fans have in their team.

Comments
Topics mentioned in this article
India Cricket Team Cricket Asia Cup 2012 Sachin Ramesh Tendulkar Bangladesh Cricket Team Virat Kohli
Get the latest updates on India vs South Africa and check out  Schedule, Results and Live Score. Like us on Facebook or follow us on Twitter for more sports updates. You can also download the NDTV Cricket app for Android or iOS.