Pakistan's cricket board on Sunday expressed disappointment with Bangladesh for considering appealing an incident in the last over of the Asia Cup final which they believe cost them the match. 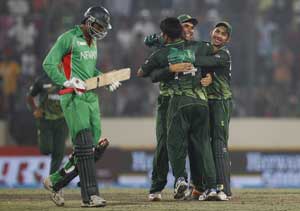 Pakistan's cricket board on Sunday expressed disappointment with Bangladesh for considering appealing an incident in the last over of the Asia Cup final which they believe cost them the match.

Bangladesh on Saturday said it would appeal to the Asian Cricket Council (ACC) to review the last over, accusing Pakistani paceman Aizaz Cheema of deliberately blocking batsman Mahmudullah Riyad from taking a second run.

Pakistan beat Bangladesh in a thrilling final on Thursday by two runs to lift the four-nation Asia Cup.

"It's really sad and disappointing to hear the statement from BCB (Bangladesh Cricket Board) official," Alam told AFP.

"It was a thrilling final and everyone praised Bangladesh for their fight and their decision to appeal is just an afterthought after the result."

"The fact of the matter is that no match umpire or referee complained about this to Pakistan management and Bangladesh's complain will spoil a wonderful final which everyone enjoyed," said Alam.

BCB said it would seek five penalty runs for deliberate obstruction and a reversal of the result in their favour.

"We have seen video footage of the incident repeatedly. It is clear that Cheema blocked Riyad deliberately," Enayet Hossain Siraj, chairman of the BCB operations committee, told reporters.

"We will lodge a written appeal to the ACC very soon and will also give a copy to the International Cricket Council."

Bangladesh are currently considering an invitation to tour Pakistan for a limited overs series next month.

They sent a delegation to assess security arrangements in Pakistan for the tour but said a final decision will only be made by the country's government.

Should Bangladesh go they will be the first Test playing nation to tour Pakistan since terrorist attacks on the Sri Lankan team bus in Lahore three years ago.

The attacks, which left eight people dead and seven visiting players and an assistant coach wounded, suspended all international cricket in Pakistan as teams refused to tour the troubled country because of security fears.