The Bangladesh Cricket Board has said it will complain to the Asian Cricket Council about an incident in the final over of Bangladesh's chase in the Asia Cup final against Pakistan. 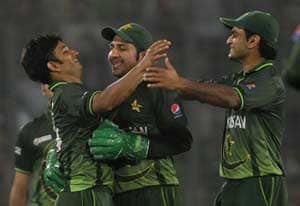 The Bangladesh Cricket Board has said it will complain to the Asian Cricket Council about an incident in the final over of Bangladesh's chase in the Asia Cup final against Pakistan. The incident, during the first ball of the 50th over, involved a collision between the bowler Aizaz Cheema and Mahmudullah as the latter tried to come back for a second run - something the BCB claims the Pakistan bowler did deliberately.

"We have seen video footage of the incident repeatedly. It is clear that Cheema blocked Mahmudullah deliberately," Enayet Hossain Siraj, the chairman of the BCB cricket operations committee, told reporters in Dhaka. "We will lodge a written appeal with the ACC very soon and will also give a copy to the ICC."

Law 37 of the rules of cricket sanctions a strict penalty for the fielding team if a fielder is found by the umpire to deliberately obstruct a batsman while attempting a run. Neither batsman can be dismissed (if a run-out has taken place), five penalty runs are awarded to the batting side, the delivery will not count as one in the over, the run will count even if the batsmen haven't crossed and the batsmen can choose which of them faces the next delivery. Whether or not there was intent behind the collision is for the umpire to determine; in this case, after the players had collided, the umpire Steve Davis was seen having a word with both players. The delivery yielded a single.

"It is clearly written in the playing conditions that it will be a dead ball if the batsman faces an obstacle while running by a bowler or fielder. The batting side will get a five-run penalty," Siraj was also quoted as saying in the Daily Star. "In that case, we would have required only four runs off six balls. We have footage which clearly shows that the bowler in question created an obstacle to [Mahmudullah] Riyad."

Bangladesh needed nine to win at the start of the 50th over; they lost by two runs. Had Pakistan been penalised, Bangladesh's task of chasing down 237 for a win would have been made significantly easier.

Comments
Topics mentioned in this article
Mahmudullah Cricket Pakistan Cricket Team New Zealand Cricket Team Bangladesh Cricket Team Aizaz Cheema Asia Cup 2012
Get the latest updates on ICC T20 Worldcup 2022 and CWG 2022 check out the Schedule, Live Score and Medals Tally. Like us on Facebook or follow us on Twitter for more sports updates. You can also download the NDTV Cricket app for Android or iOS.