"Try To Get Back As Soon As I Can": Ravindra Jadeja Shares Pic Post Knee Surgery

Ravindra Jadeja had played a crucial knock of 35 runs in India's group stage win over Pakistan. But he was ruled out of the remainder of the tournament after that match and India have missed his all-round skills since then. 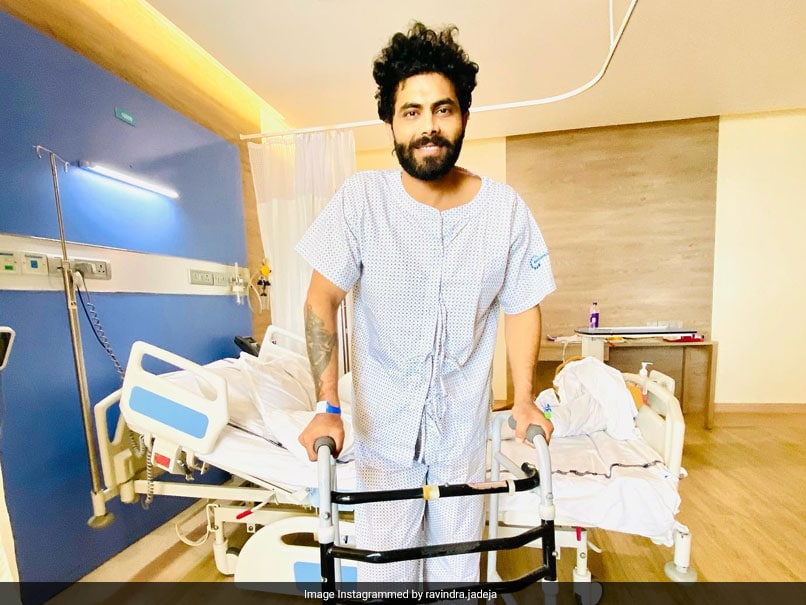 Ravindra Jadeja posted a photograph on Instagram after undergoing surgery

India all-rounder Ravindra Jadeja underwent a knee surgery and on Tuesday took to Instagram to post a photograph along with a caption in which he informed his fans that his surgery was successful and that he would try to get back to competitive cricket as soon as he can. He also thanked the BCCI and a bunch of other people for supporting him.

Jadeja had played a crucial  knock of 35 runs in India's group stage win over Pakistan. But he was ruled out of the remainder of the tournament after that match and India have missed his all-round skills since then.

"The surgery was successful. There are many people to thank for their support and involvement - BCCI, my teammates, support staff, physios, doctors and the fans. I will start my rehab soon and try to get back to cricket soon as I can. Thank you to everyone for your kind wishes," Jadeja wrote on Instagram.

India coach Rahul Dravid had informed the media ahead of the Super 4 clash against Pakistan that Jadeja had been ruled out of the tournament but had said that it would be too early to rule him out of the ICC T20 World Cup later this year.

"Jadeja has injured his knee; he is obviously ruled out of the Asia Cup," Dravid said ahead of India's Super 4 match against Pakistan. "He is under the care of the medical team, he is going to see the doctors, see the experts. The World Cup is still a fair bit away, and we don't want to jump to any conclusions and rule him out or rule him in. We'll see how it goes.

"Injuries are a part of the sport; it is part of our job to try to manage them. A lot will depend on rehab and the severity of the injury. I don't want to rule him out or don't want to make too many comments until we have a much clearer picture and a better idea, especially because the World Cup is six or seven weeks away from now," Dravid had said.

India Cricket Team Cricket Social
Get the latest updates on Fifa Worldcup 2022 and check out  Fifa World Cup Schedule, Stats and Live Cricket Score. Like us on Facebook or follow us on Twitter for more sports updates. You can also download the NDTV Cricket app for Android or iOS.