N Srinivasan also said he would work towards the development of the ICC as its newly-appointed chairman. 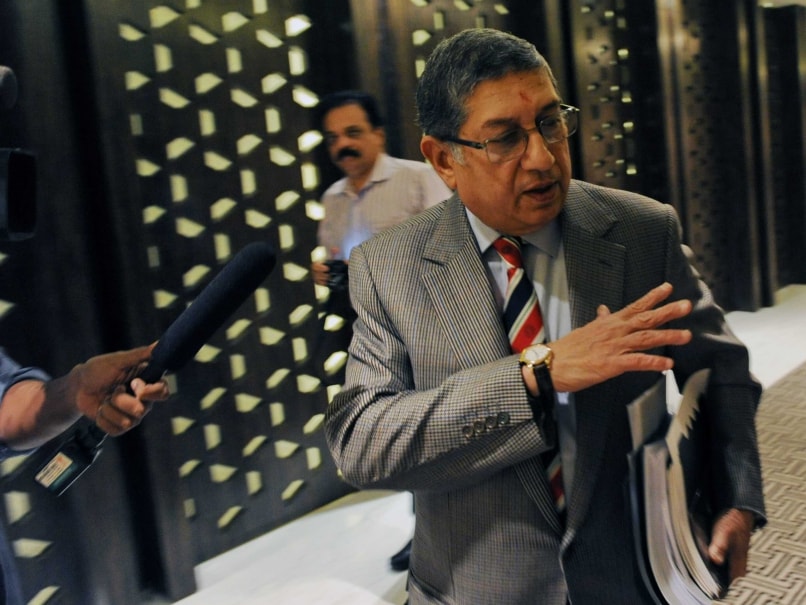 Believing firmly in the primacy of Test cricket, new ICC chairman N Srinivasan has said that the traditional five-day format "cannot be a 10-member club" forever and added that China are keen to enter the fray if cricket becomes an Olympic sport.

Â "Test cricket cannot be a 10-men club. So in those countries where there is an opportunity, there is interest and where there is domestic structure (the format should be promoted)," he said.

He spoke about China's plans of taking active interest in the sport.

"The Chinese are the member of Asian Cricket Council. A representative of Chinese Cricket Association made it clear that if cricket becomes an Olympic sport then they will plunge into it. But at the moment they are concentrating on other sports," the cricket administrator told 'NDTV'.

Srinivasan who recently reiterated that he had himself "stepped aside" from functioning as the BCCI president in the wake of IPL spot-fixing prove, said he is keen on bringing about a change in the international cricket set-up during his tenure as ICC chief.

"I have told all the associates and affiliates that I want to make a change and to that extent the development committee of the ICC composition has been changed.

Now, I, as chairman of ICC, will chair the develop committee. It was not so before.

"We have two full member directors also so there is going to be a lot of focus on what we can do and how to bring more competition in cricket by upgrading the skills of those who are on the verge and who are the top associates. He gave a lot of weight to the upcoming series between India and England.

"Cricket is becoming more open. For a person who so passionately cares about Indian cricket I think our clock starts on 9th (July) when we play the first Test because ultimately if our team does well then everyone is happy."

Indians may have held the top position in the ICC earlier but Srinivasan said his appointment is different from past administrators such as Jagmohan Dalmiya and Sharad Pawar.

"This is the first time that someone from India representing the BCCI is going to head the ICC where you also represent the country at the same time. In earlier years when earlier presidents were there, they did not have a vote on the table. The representative of ten members have the vote. The president preside over the meeting.

"At the board meeting he did not have a vote because if you are a president at that time the rule was that you cannot hold a position in your country. "That has changed now. So a person who is representing India can be the chairman. So when you sit there, you sit with a vote, and that makes a huge difference."

Srinivasan made apparent his admiration for the Indian Premier League. "I am an old fashioned enthusiast about cricket. In the earlier days I used to think that one-day game should it be there? Then I became an enthusiast of ODI cricket.

"When T20 came I said what 20 overs!... What we must recognise is that we must learn to accept change. We have seen that the IPL has brought new audience into cricket, a lot of people who were going away from cricket have now come back and I think we should be grateful to this shorter version of the game for doing that."

Talking about his role in ICC, he said, "As far as ICC is concerned I think the most important role that one can play is to first bring your passion into ICC and make ICC focus on what are the needs of today's cricket.

"Cricket is all about competition. One cannot forget the fact that a very competitive and close finish in a Test match is more exciting than your T20 game.

"In old days how was ICC formed? It was an imperial cricket conference. Australia, England and South Africa and you did not have other countries playing cricket either to their level or sufficiently wide spread domestically.

"India has taken 70-80 years to get where we are today. There were days when no one wanted to tour India. We had to pay guarantee money to get big teams and even if the top teams came their top players seldom came."

Asked if caste system existed in cricket, he said, " Whether it is geo-politics or whether it is in sports or in any institution, this is bound to happen and it is no small measure due to the performance of Indian team on the field that India today is a substantial contributor to cricket economy.

"In this next cycle India will get more from the rights income, sponsorship income of ICC."

The supremo of India Cements, which owns the high-profile Chennai Super Kings, seemed at ease when asked about his detractors.

Asked if buying an IPL team was a mistake, he seemed to be favour of it. "The concept was that there would be bidding for eight cities and the top eight bids would get the franchise.

It was at that moment that I asked the question because if for example nobody had bid for Chennai, people of Chennai would not have a franchise.

The cricket lover in me said, people would embrace the team.. Today the players of the team have been literally adopted by the people of Chennai.

"Now let's put the other way round if Chennai, one of the original Test centre was left without any franchise, I, being part of the BCCI watching that happen, would not have forgiven myself."

He was also asked about the issue of conflict of interest that has been haunting him for a while.

"India Cements is a public company but I am not permanent in BCCI. When my term will be over I will have nothing to do, it is not permanently attached. I don't view any of this public position as something that you have to hang on to forever." He said it has always been a habit with India Cements to employ cricketers.

"Employing cricketers has been a habit. You must understand when we ask a cricketer to play for our team we prefer to employ him so that he knows that he has got a job and security and if finishes his cricket he can go into marketing and walk into some other part of the company. "Today you can say that IPL gives you a lot of money but it was not there till day before yesterday."

He further said, "For example, if you talk of former captains do you know that Rahul Dravid joined India Cements when he left college, before he played Ranji trophy.

We spotted the talent, we invited him to play that can't be a fault. This company is all about cricket and relates to cricketers.

On his son-in-law Gurunath Meiyappan's alleged involved in the IPL scandal, he said, "A charge-sheet has been filed. It is for police to prove it and Meiyappan to defend it. I cannot say anything about this now.

"I won't say that it has brought murk to my family life. My daughter is very close to me and granddaughters and everybody is close to me. This is something that has to be cleared up. I have taken a lot of flak for it but one has to be fair on both sides. Let the trial happen."

Comments
Topics mentioned in this article
India Cricket Team N. Srinivasan Cricket
Get the latest updates on ICC Women's Cricket World Cup 2022 and IPL 2022, check out the Schedule , Live Score and IPL Points Table. Like us on Facebook or follow us on Twitter for more sports updates. You can also download the NDTV Cricket app for Android or iOS.