Steve Smith scored a quick-fire 21-ball 40 and picked up two wickets as well. 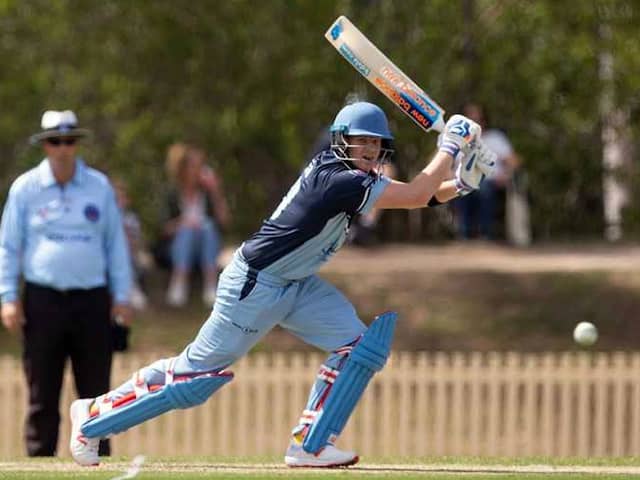 Steve Smith scored 40 off 21 balls, including three boundaries and as many sixes.© AFP

Former Australian captain Steve Smith is currently playing in NSW T20 Premier cricket - an Australian domestic T20 league. Steve Smith, playing for Sutherland against Manly-Warringah, scored a quick-fire 21-ball 40 and picked up two wickets as well. Currently serving a one-year ban for his involvement in the infamous Cape Town ball-tampering scandal, Smith played an aggressive brand of cricket for Sutherland. Cricket Australia took to Twitter to upload a video of Smith's exploits with both the bat and ball. While Smith sent the bowlers on a leather hunt, Smith's perfect photocopy of MS Dhoni's trademark 'helicopter style' shot grabbed eyeballs.

Steve Smith played some extraordinary shots in NSW T20 Premier Cricket today, but what about the catch to end his innings?! pic.twitter.com/r226rkfiVA

Months after the ball-tampering incident, an independent review by the Sydney-based Ethics Centre into the scandal involving Smith, David Warner and Cameron Bancroft condemned an arrogant and controlling culture at Cricket Australia (CA).

The independent review, which released a 145-page report on the incident, said that the responsibility for the arrogant cricket culture in Australia lay "with CA and not just the players held directly responsible for the appalling incident at Newlands".

On the same day, the Australian Cricketers' Association urged Cricket Australia to cut down the bans handed to the trio.

"The events in South Africa were in part a by-product of a culture and system which, amongst other things, placed too much pressure on players to win," said ACA President Greg Dyer, a former Test wicketkeeper.

"There must be a reconsideration of the harshness of the penalties handed down to Steve Smith, David Warner and Cameron Bancroft," Dyer added.

On the match front, Sutherland beat Manly-Warringah by four wickets.