Examining the IPL bid through the prism of glasnost suggests that in the form of the IPL, Star India have a winner on their hands. What's more, you, the consumer, won't need to bear the burden of the 16 thousand crore bid. Ever been dealt a perfect hand in blackjack? That's exactly the kind of feeling that those responsible for Star winning the IPL media rights for the next five years may have felt on Monday afternoon. After all, winning a tender by quoting just 3% more than the sum of all parts can best be described as a perfect bid. The perfect 21 of blackjack, if you please. 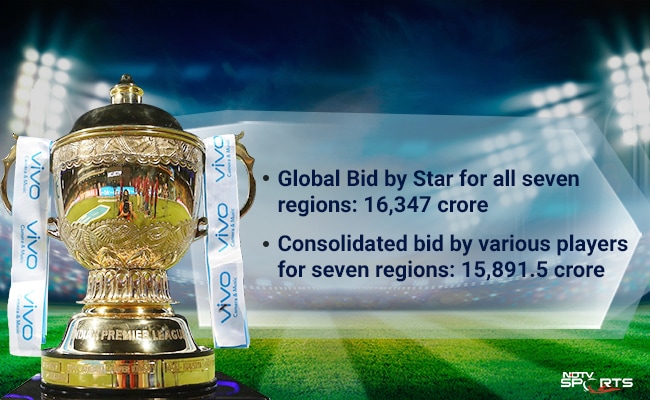 That wasn't the only strategy that Uday Shankar and his team mastered during the bidding process. Star also employed the best tenants of 'game theory' by submitting substantially low bids in each of the seven categories; thereby ensuring that they do not contribute in raising the cumulative total of top individual bids; which in turn allowed the global consolidated bid, of which they were the only player, to walk away with the prize. 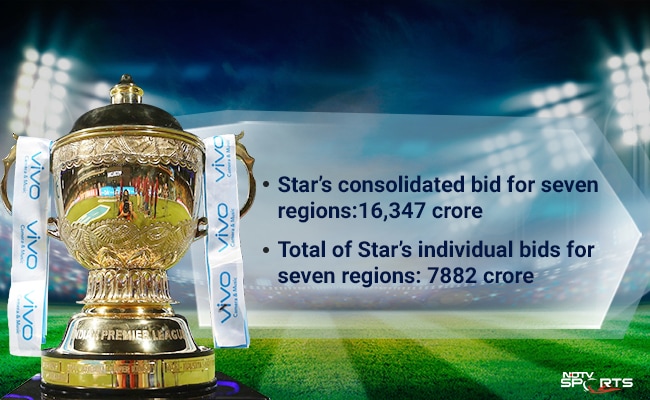 Now, as the dust settles, or the confetti in this case, the question that's staring us in the face is: Have Star overbid or do they have a winner on their hands?

At the risk of soothsaying - never a smart thing to do in a notoriously volatile Indian TV market - Star India seems to have cracked the IPL code. What's more, fears of the end user being forced to bear the brunt of Star's supposedly 'astronomical bid' by paying more for subscription can also be laid to rest. A detailed look at the market numbers suggests such notions are completely misplaced.

Apart from the 16,347 crore bid, Star India will have to incur other costs too during the 5-year cycle from 2018-2022. These include the TV production and marketing cost which will amount to a total of 500 crore for 5 years (100 crore a year). Then there is the interest on the bank guarantee (@ 1% per annum), and the interest on the 16% advance payment that Star will make to the BCCI honouring their bid (@ 3% per annum). These two interest amount total up to roughly 500 crore over five years, taking Star's total costs to a gargantuan figure of 17,347 crore. 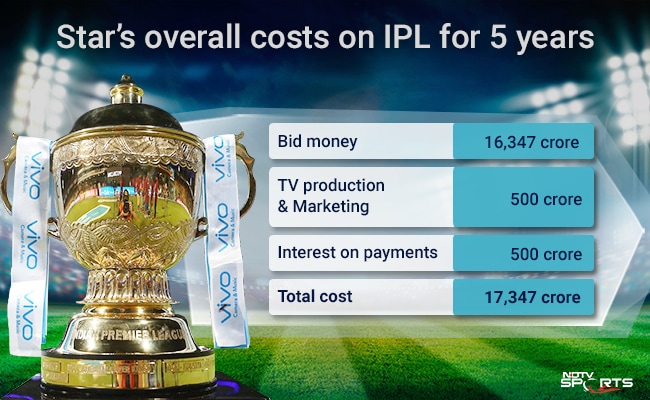 As the costs climb up, remember, Star's 16,347 crore bid is for a consolidated global bouquet of seven regions. However, since Star India isn't a global player as far as the TV universe is concerned they are bound to sub-lease the TV rights for regions outside the India sub-continent, whilst retaining the global digital rights, in line with their strategy of turning their digital platform Hotstar into a major global player. The bids for five regions other than the Indian sub-continent amounted to 860 crore. Though, market experts feel these regions were underbid due to lack of competition in these market. The correct value for these five regions should be anywhere close to a 1000 crore. So effectively, Star could get back 1000 crore from the market when they set out to sub-sell these five regions. But, since Star is likely to hold onto the digital rights of these regions, their TV value alone is estimated at 800 crore. 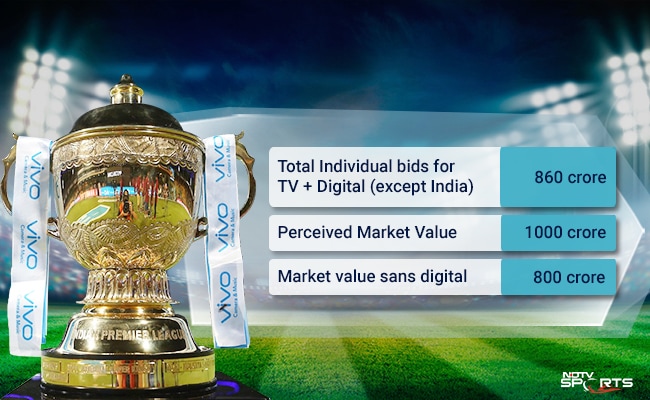 With the addition of miscellaneous costs like TV production, losing interest on the money deposited, along with the exit of global TV costs, Star's total liability in relation to the IPL media rights for a period of 5 years stands at 16,547 crore. 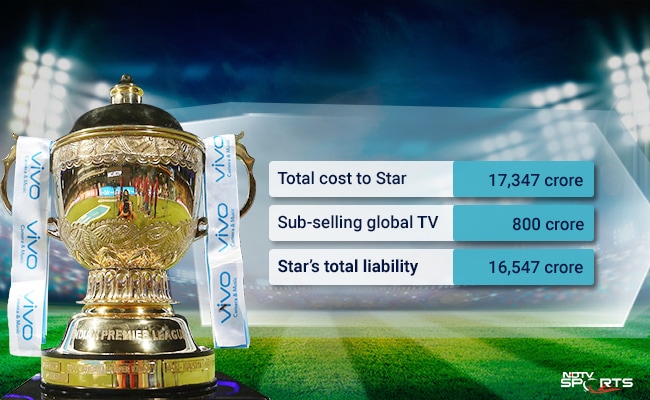 Return on investment from TV rights

Sony's revenues in the last five years of the IPL show an average yearly growth of 15% from advertising and sponsorship alone, eventually touching 1300 crores in 2017. Like in the case of Sony, there is no reason to believe Star's advertising revenues will not witness the same steady rise. A study done earlier this year by media buying agency GroupM predicts advertising spends in India to grow around 10% annually. As a result, Star too can look forward to build from the 1300 crore figure that they've inherited from Sony, year on year. And even if one were to make concessions for the fact that time allocated for ads during an IPL season has already reached a saturation point, a 10% growth on the existing ad rates would still be an attractive proposition for the advertisers, considering similar hike in rates across genres based on industry predictions. If the market remains true to the trends predicted, Star can rake in an estimated 9000 crore from the advertising stream during the five year period. 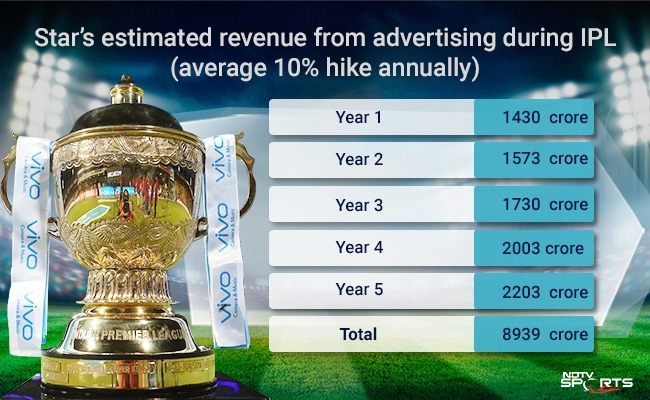 Return on investment from TV subscription

The subscription growth estimates are based on:

a) Telecom Regulation Authority of India or TRAI rules state that on cost per subscriber basis the carrier should earn 50% while the broadcaster 45%. Unfortunately, due to various lacunae in the system, the broadcaster is only getting a 10-15% chunk of the subscription pie. But, course correction is on the anvil.

b) Presently, only 3/4th of the country has been digitised. Despite the growth that was witnessed four years ago, phase III & IV of digitisation has seen numerous delays. The analog base in the country still remains 47 million strong. However, experts predict the market to mature in the next 3 to 4 years and bring with it greater subscription revenues. 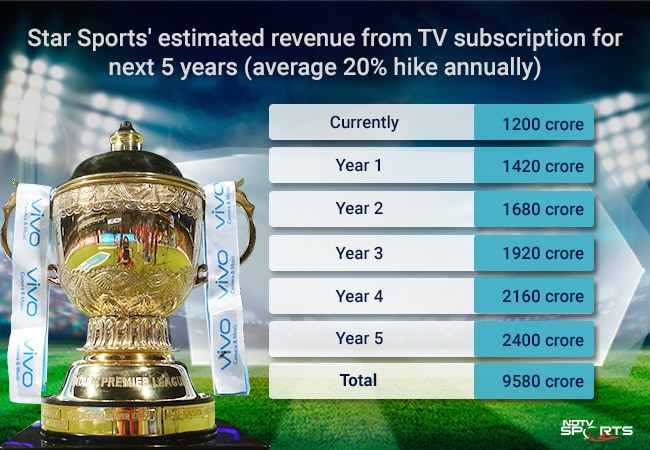 Remember, this predicted rise in subscription revenue is independent of Star acquiring the IPL rights. Conversely, if Star were to not renew their India cricket rights- of which there are clear indications- the subscription graph will still continue going north. But while all of the subscription profits cannot be appropriated against IPL costs, considering Star hold the rights to various other domestic and international sporting properties, given the huge market value and TV ratings that the franchise based T20 league commands, the largest chunk from the subscription pie would belong to the Indian Premier League: a rough estimate based on parameters such as TV ratings, ad revenues and media rights value, would peg IPL's share of Star's total subscription revenue at 45% or 4311 crores in 5 years.

In case you're worried that you may have to loosen your purse string in order for Star to achieve their target subscription number, don't be. First, The government controls the rate at which subscription fee grows in the country. Typically, TRAI allows a meagre 6-7% price hike each year, if at all. In fact, some years have seen no rise in subscription fee at all. Besides, if ever there is an exponential rise in tariffs the parliament would be forced to intervene; worse still, the consumer may revolt. So, as things stand, the end user needn't be worried.

That Digital is the fastest growing medium across the world is now an established fact. In India alone, advertising on digital platform grew at a phenomenal rate of 30% last year. In addition to this, broadband growth in the country is estimated to grow at 17% per annum, whilst a 25% growth is predicted in the mobile handset market. Couple this with the fact that Star hold both TV & the digital rights which will further help them drive their digital growth through cross promotion, and one is looking at IPL's digital revenue quadrupling in the next five years.

Last year, Hotstar made a profit of 20 crores, after coughing up roughly 100 crore a year for IPL digital rights, using the freemium model (a combination of free + subscription fee). Keeping in line with the prediction of revenues quadrupling, Star is looking at a sum total of 1680 crore on digital over the next five years, just from the Indian subcontinent. Add about 300 odd crore that they are likely to earn from the international market and the digital revenue rounds up at 2000 odd crore. 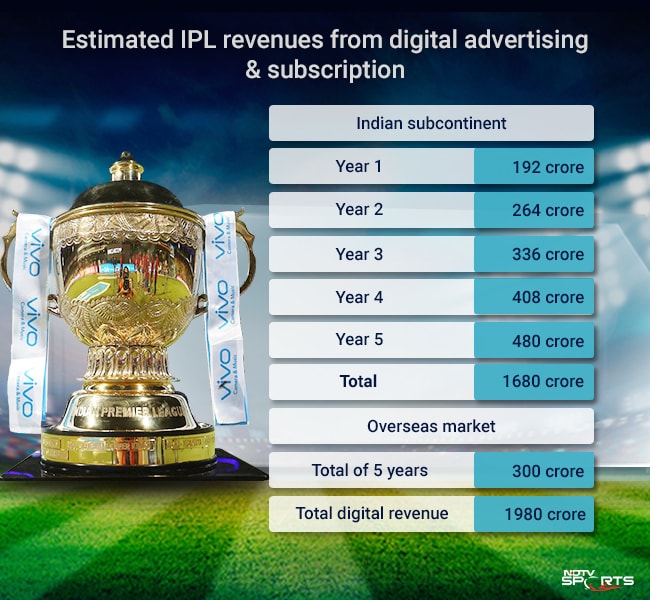 Many may be left wondering that if the outlook for digital revenue stands at 2000 crore why did entities like Facebook, Reliance and Airtel bid in excess of 3000 crore? As far as Reliance and Airtel are concerned their game plan seems pretty obvious. Manifestly, the two mobile telcos would have subsumed the extra 1000 crore towards costs of customer acquisition. For e.g, Reliance plans to spend 2 billion in capital expenditure, a few thousand crores as capital expenditure via the IPL route is not something they are likely to lose their sleep over.

In the end it all boils down to one big question: Have Star managed to hit a six or have they been stumped in their pursuit of arguably the biggest sporting property on this side of the globe? The balance sheet based on market estimates would suggest the latter, showing a cumulative loss of 1300 crore over 5 years. 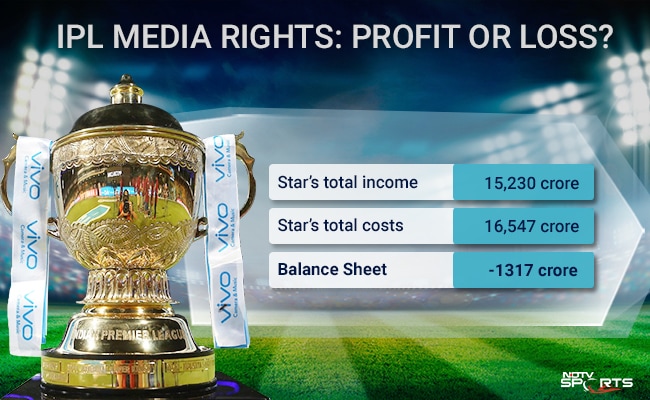 But beyond the numbers, Star's IPL bid reveals a different tale; similar to the one where a king loses a battle but ends up winning the war. Star, by grabbing the IPL rights in addition to the India & ICC cricket rights, have in one stoke ended the duopoly that exited in Indian sport for over a decade and turned it into a monopoly. Frankly, a loss of a few hundred crores can easily be compensated by the psychological damage caused to their only rival, Sony for losing the one big sporting property they owned.

If making money was Star's sole agenda, they can still very easily sell the digital rights for 3900 crore to Facebook and laugh their way to the bank with huge profits from TV revenues over the next five years. But their's, as is pretty evident now, was a bid to win. 'All or nothing', as Uday Shankar succinctly put it.