SL vs Pak 2nd Test: Lankan skipper Karunaratne and Pakistan paceman Haris Rauf were also around and were seen laughing and enjoying the banter between Dickwella and Alam. 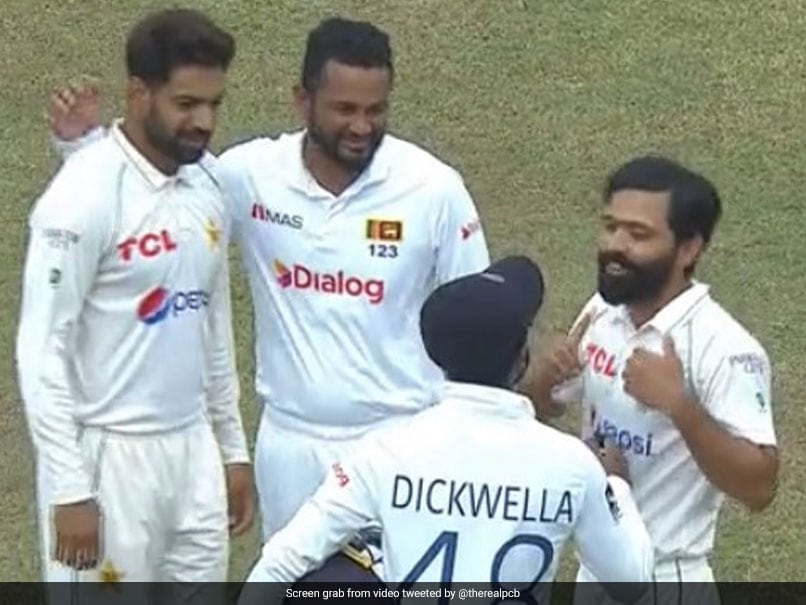 Sri Lanka tightened its grip on the 2nd Test match on day 3 of the second Test match against Pakistan despite a spirited comeback by the touring team's bowlers. Pakistan were bowled out for 231 in their first innings with Ramesh Mendis picking up a fifer. This gave the hosts a sizeable first innings lead but the Pakistan bowlers picked up regular wickets to deny Sri Lanka a clear advantage yet.

The Lankans ended the third day's play at 176/5 in the second innings, leading Pakistan by 323 runs with captain Dimuth Karunaratne and Dhananjaya de Silva in the middle.

While this is a big fourth innings target already, the Lankans would want to take this above 400 and bat the Pakistanis out of the match, given the fact that they had chased down a big total in the first Test.

While the intensity was high between the two teams on the field, the players indulged in some friendly banter away from the action.

Pakistan Cricket Board shared a video of Sri Lankan wicket-keeper Niroshan Dickwella involved in a conversation with Pakistan's Fawad Alam with both players enjoying a laugh.

Lankan skipper Karunaratne and Pakistan paceman Haris Rauf were also around and were seen laughing and enjoying the banter between Dickwella and Alam.

The Test series is being played in Sri Lanka at a time of great distress in the island country with protests taking place due to the severe economic crisis in the country.

Dimuth Karunaratne Cricket
Get the latest updates on IPL Auction 2023 and check out  IPL 2023 and Live Cricket Score. Like us on Facebook or follow us on Twitter for more sports updates. You can also download the NDTV Cricket app for Android or iOS.