Explosive claims about corruption in Pakistan's cricket team stunned a London courtroom Wednesday as three guilty players and their agent spoke out on each other's roles as they awaited sentence. 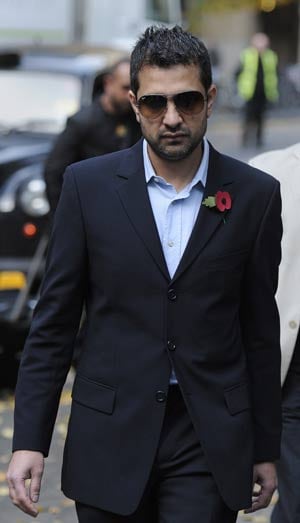 Explosive claims about corruption in Pakistan's cricket team stunned a London courtroom Wednesday as three guilty players and their agent spoke out on each other's roles as they awaited sentence. (Also see: Timeline of the spot-fixing saga)

With the four stood in the dock, their lawyers sent claims and counter-claims flying across the packed Court 4 at Southwark Crown Court.

Butt, 27, who became a father Tuesday for the second time just 30 minutes before being found guilty, watched as his lawyer said he admitted his career was over and he stood to lose his family.

The lawyer for Majeed, 36, pleaded in mitigation -- a submission which included a string of extraordinary claims about what was going on within the Pakistan team.

Accepting that his client was facing jail, he told the court of the agent's frustration at the "lies" the jury had heard from the defendants, the BBC reported.

The lawyer said Butt had approached Majeed in 2009 to get involved in fixing and that Butt and another player, who is not among the three in the dock, had taken him to a meal in March 2010 to push him into fixing.

He said Majeed was introduced to a mysterious bookmaker called Sanjay, who was running the racket.

The judge then heard that Asif was given such a huge amount to keep him from joining another fixing racket.

Lawyers for Butt and Asif dismissed the claims about the sums of cash.

Cooke also dismissed claims that Aamer was only involved in one episode of spot-fixing.

He said that text messages sent from murky contacts in Pakistan suggested that the talented youngster was also implicated in fixing during the preceding Test at The Oval.

Aamer claimed he was being leant upon and feared for his future in national side if he did not take part in the conspiracy.

"I refuse to accept that basis of plea on the material I have seen," Cooke said.

"There are certainly texts and the like which suggest that Aamer's first and only involvement was not limited to Lord's, it was not an isolated and one-off event," Cooke said.

Meanwhile former Pakistan captains urged the Pakistan Cricket Board (PCB) to act immediately to save future players from corruption.

"We desperately need to save our future generations after what happened to Butt, Asif and Aamer," Rashid Latif, who blew the whistle on match-fixing in 1995, told AFP.

"We have not done enough in the past and that's what we are paying for."

Fellow former skipper Aamer Sohail said the PCB had to be more pro-active.

"The PCB should have played a more pro-active role last year... brought the players back to Pakistan immediately and tried them under our code of conduct," he said.