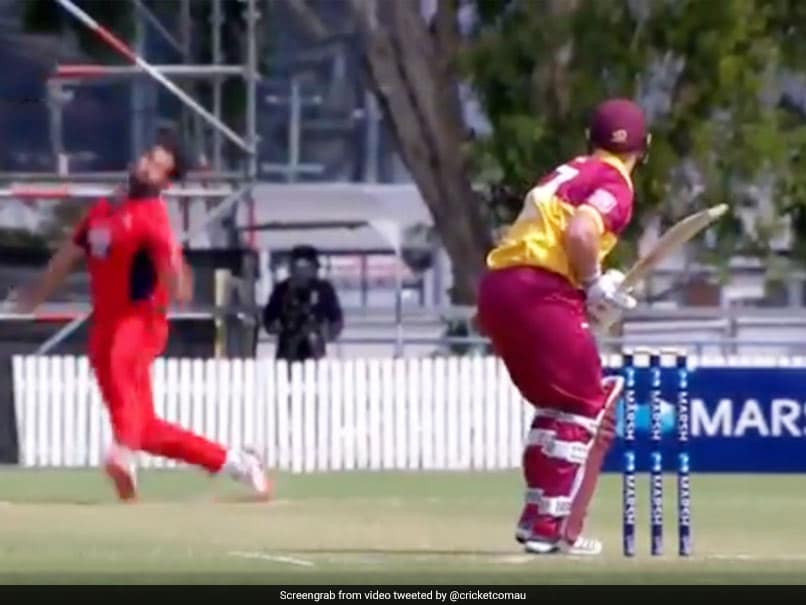 South Australia fast bowler Wes Agar landed on the side of his foot but escaped any injury.© Twitter

South Australia bowler Wes Agar, opening the bowing for his team against Queensland Bulls in Marsh Cup, fell awkwardly at the popping crease even before releasing the ball but luckily escaped what could have been a "nasty" injury. The Cricket Australia posted a video of the incident where Agar charged in to bowl but landed on the side of his foot. His hind leg them rammed into his front leg but didn't cause him any harm. The umpire immediately signalled for a dead ball.

Cricket Australia tweeted a video and with a caption which read: "Oh man this could have been nasty".

Oh man this could have been nasty

Wes Agar, after escaping a nasty injury in the first over of the innings, bowled six overs in the match and failed to take any wickets, conceding 39 runs.

Queensland Bulls chased down the target of 227 runs set by South Australia quite comfortably with more than 14 overs to go, winning the match by seven wickets.

For South Australia, no one barring Tom Cooper could get past the 50-run mark, while Queensland Bulls' three batsmen Sam Heazlett, Matthew Renshaw and Joe Burns scored half-centuries.

However, the standout performer of the match was Queensland fast bowler Billy Stanlake who picked up three wickets conceding runs at 3.80 runs per over in his 10 overs.

Stanlake, who plays for SunRisers Hyderabad in Indian Premier League (IPL) won the player of the match award for his excellent bowling.

After this match Queensland won two out of two games and consolidated its second position in the points table, while South Australia are yet to open their account after losing their tournament opener.

South Australia will play New South Wales on Thursday, while Queensland will next face Victoria on September 29.

Comments
Topics mentioned in this article
Joe Burns Cricket Billy Stanlake
Get the latest updates on IPL Auction 2023 and check out  IPL 2023 and Live Cricket Score. Like us on Facebook or follow us on Twitter for more sports updates. You can also download the NDTV Cricket app for Android or iOS.