Smriti Mandhana posted a video of her and Jemimah Rodrigues playing a hit song from Shah Rukh Khan's movie. 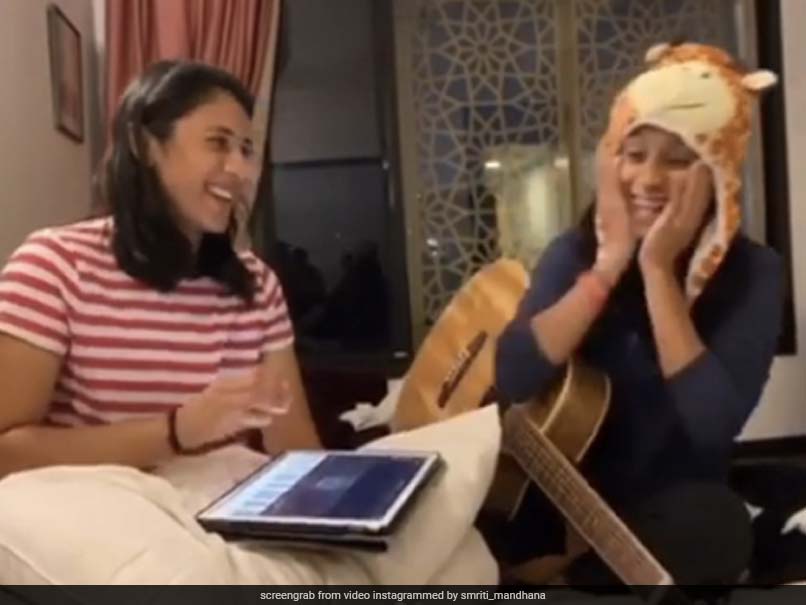 The coronavirus lockdown has brought sporting activities across globe to a grinding halt, leaving athletes finding it hard to kill time at home. However, amidst the lockdown, the Indian women cricketers are coming up with different ways to entertain themselves and their fans. Interacting with their followers directly over social media has become an important part of their daily routine. Smriti Mandhana, opener of the Indian women's cricket team, on Tuesday shared a couple of videos on Instagram, featuring teammate Jemimah Rodrigues. In the first video, the two players can be heard playing a popular Hindi song "Main Koi Aisa Geet Gaoon" from movie 'Yes Boss', featuring Bollywood superstar Shah Rukh Khan. Mandhana is playing the tune on her i-Pad, while Jemimah is doing so on a guitar, that too in complete sync, which impressed their followers and within an hour, the videos received over 85,000 likes.

"Apart from irritating each other this is what we do in our free time @jemimahrodrigues. P.S: Don't miss the 2nd video," Mandhana captioned the video.

Apart from irritating each other this is what we do in our free time @jemimahrodrigues P.S: Don't miss the 2nd video . . : @radhay21 @shafalisverma17

In the first video, the two of them are seen jamming in complete sync but it came after they dedicated a lot of "free time" polishing their skills, which was clearly visible in the second video.

The second clip was a blooper where Mandhana and Jemimah are struggling to coordinate with each other so much so that Jemimah can be heard saying that she "forgot" the tune on several occasions.

India, who were unbeaten going in to the final, lost to hosts Australia who clinched their record-extending fifth T20 World Cuptitle in front of a packed Melbourne Cricket Ground.

India Women Cricket
Get the latest updates on T20 World Cup, check out the T20 World Cup Schedule and Live Score . Like us on Facebook or follow us on Twitter for more sports updates. You can also download the NDTV Cricket app for Android or iOS.