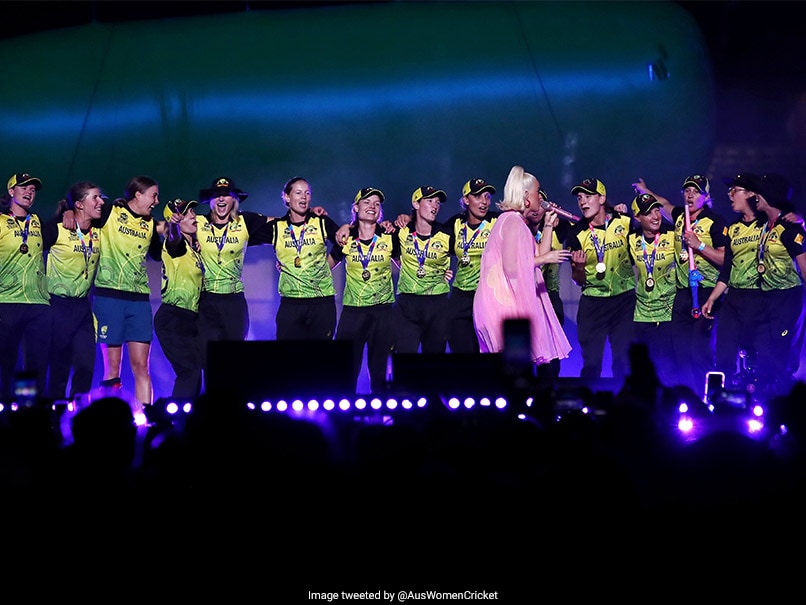 Australian women's cricket team won their fifth T20 World Cup title after beating India in the final at the Melbourne Cricket Ground (MCG) on Sunday. After the match, the Australian players shared the stage with American pop star Katy Perry to celebrate their record-extending title victory. Some of the players even took the centre-stage and enthralled the audience with their electric dance moves. Katy Perry, who set the tone for the historic finale with her electrifying performance, encouraged the players to show-off their dancing skills, and one player who stood out was Sophie Molineux. Sharing a video of the the celebration, Cricket Australia tweeted: "World Cup champion and dance sensation Sophie Molineux had quite the night with her new mate Katy Perry! #T20WorldCup".

World Cup champion and dance sensation Sophie Molineux had quite the night with her new mate Katy Perry! #T20WorldCup pic.twitter.com/Td61HGSzQP

In the video, Molineux can be heard explaining her feelings about last night's performance and the surreal experience of sharing the stage with the pop icon.

"Yeah, I woke up and had to watch it three or four times to get my head around the fact that I was for one -- out there with Katy Perry, and two dancing and pretty much taking her off stage so I could take centre stage. But she was awesome with us, She embraced the fact that she had 15 other back-up dancers with her. But yeah, it was pretty special," Molineux said in the video.

Australia, playing in front of their home crowd, outplayed India in all three departments of the game.

Australia batted with great intent from the ball one and never allowed India to get back in the game and posted 184/4 --the highest-ever total in a T20 World Cup final be it men's or women's cricket.

Australia bowlers also bowled brilliantly and bundled India out for 99 runs, thus clinching the final by 85 runs for their fifth title.

Australia Women Women's T20 World Cup Cricket
Get the latest updates on ICC Women's Cricket World Cup 2022 and IPL 2022, check out the Schedule , Live Score and IPL Points Table. Like us on Facebook or follow us on Twitter for more sports updates. You can also download the NDTV Cricket app for Android or iOS.