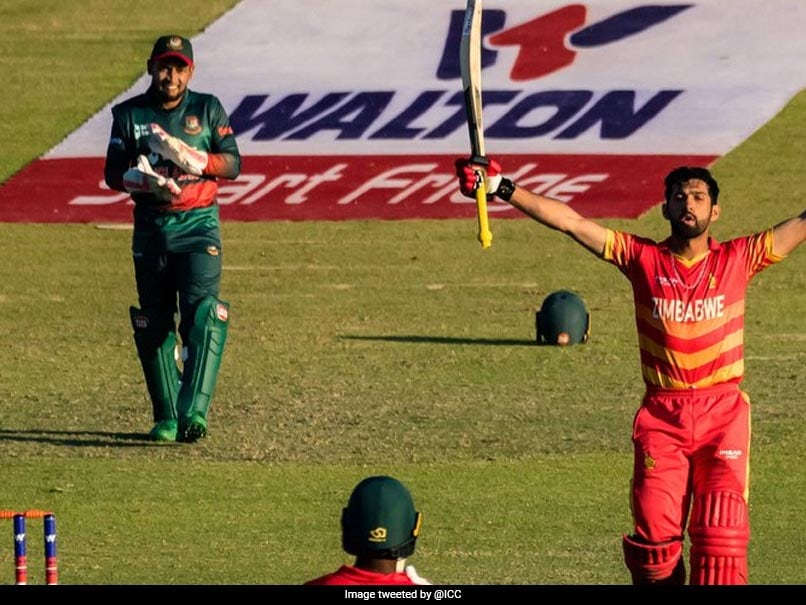 Sikandar Raza scored an unbeaten 117 as Zimbabwe staged a great run chase for the second time in three days to beat Bangladesh by five wickets on Sunday and take a winning 2-0 lead in a three-match one-day international series. The Pakistan-born batter hit four sixes and eight fours off 127 deliveries and his 201-run fifth-wicket partnership with captain Regis Chakabva turned the tide after Bangladesh posted 290-9 in Harare. Chakabva played a wonderful supporting role to Raza, who has been consistently outstanding for his adopted country, smashing 102 runs off 75 balls, including two sixes and 10 fours.

Zimbabwe reached 291-5 with 15 balls to spare after the early loss of wickets and a slow scoring rate suggested they had little chance of success at Harare Sports Club.

"Since (coach) Dave (Houghton) came back, we have put a lot of emphasis on a lot of good things and to be able to achieve that, it is such a humbling feeling," said Raza.

"I know I am grabbing the (individual) trophy but Reggie (Chakabva) and Tony (Muyonga) did well. The bowlers also did an amazing job. So, as much as it is me, it is really all of us.

"It is good that I am doing my job, but to have 100s from me and Reggie, that little cameo from Tony, and Luke (Jongwe) the other day, tells you the depth of the squad. I am very pleased for the boys."

Bangladesh skipper Tamim said: "We put up a decent total. During the first game, we had an opportunity to score 20 more runs. Today, I thought our batting was good but we did not execute our bowling well.

"The wicket was good from the beginning but when the spinners came on, it was not as easy as in the first game. All credit must go to Zimbabwe. They were the better team in this series."

The former national team batting star took over in June with Zimbabwe in the doldrums after 3-0 ODI and Twenty20 whitewashes by visiting Afghanistan.

Houghton told his squad to express themselves, not be afraid of making mistakes and not to be intimidated by opponents, however strong they appeared on paper.

The triumph on Sunday was the ninth in 10 ODI and T20 matches under Houghton as Zimbabwe prepare for the T20 World Cup in Australia from October.

As on Friday, Zimbabwe won the toss and opted to field, and once again the Bangladesh batsmen did well, led by an unbeaten 80 from Mahmudullah Riyad and a 50 from Tamim.

Mahmudullah hit three sixes and three fours in a 126-minute stand while Iqbal needed just 45 balls to claim his half century, which included a six and 10 fours.

Afif Hossain (41) and Najmul Hossain (38) also made significant contributions against a Zimbabwe attack in which the spin of Raza proved most effective as he captured three wickets.

In reply, Zimbabwe lost their first wicket with just one run on the board and when they found themselves at 49-4, even supreme optimist Houghton could hardly have visualised what was about to occur.

Raza and Chakabva -- standing in as series skipper for injured Craig Ervine -- took the fight to the Bangladeshi attack and slowly but surely lifted the total and raised hopes of an unlikely victory.

The loss of Chakabva, caught by Tamim at midwicket after miscuing a Mehidy Hasan delivery, did not stop the run surge and an unbeaten 30 from ODI debutant Tony Munyonga took Zimbabwe over the line.

Sikandar Raza Cricket Zimbabwe vs Bangladesh, 2nd ODI
Get the latest updates on India vs Australia and check out  Schedule, Results and Live Score. Like us on Facebook or follow us on Twitter for more sports updates. You can also download the NDTV Cricket app for Android or iOS.