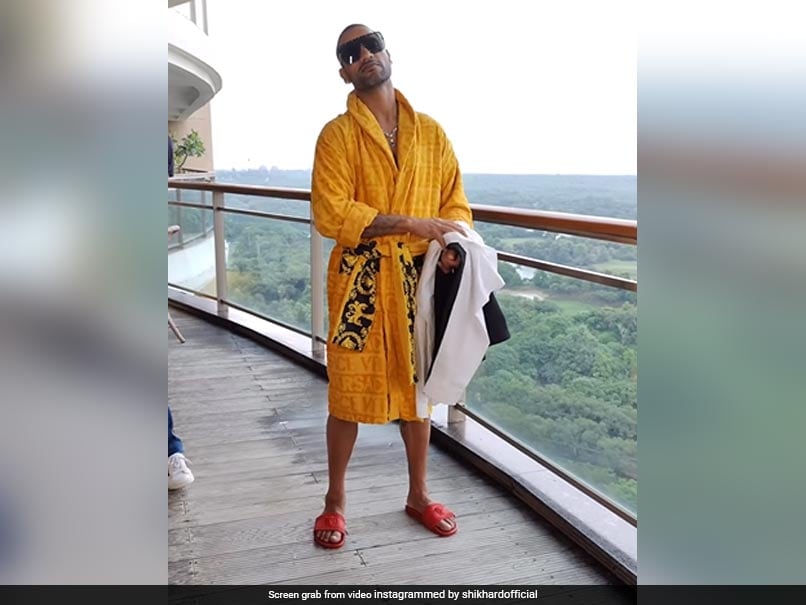 India opener Shikhar Dhawan rarely fails to entertain, be it on or off the field. While he's a dashing opening batter who plies his trade with style, he also has an amazing presence on social media, often sharing content that leaves his friends, teammates and followers in splits. On Tuesday, Dhawan took to Instagram to share a hilarious new reel. In the reel, the southpaw can be seen in a bath robe and shades and he drops a pair of black shoes, a white shirt and black trousers in front of him.

The gimmick of this particular trend is that the person steps onto the clothes and is instantly dressed in them.

However, in a twist, a friend appears behind Dhawan and drops some more clothes before Dhawan steps forward. And suddenly, his transformation goes awry.

The reel cuts to Dhawan in a vest, shorts and sandals, looking utterly confused.

The music also turns anti-climactic, with his friend laughing away in the background.

Sri Lanka cricketer Angelo Mathews and Dhawan's Punjab Kings teammate Harpreet Brar were among those who couldn't help but react to the video. They both left laughing emojis.

Dhawan recently also shared adorable pictures with his family after he met his nephew for the first time.

The left-hander captained India in the ODI series against Zimbabwe, and while he has not been able to find a spot in India's T20 team, he is set to lead the team in upcoming ODI series at home against South Africa.

Shikhar Dhawan Cricket Social
Get the latest updates on Fifa Worldcup 2022 and check out  Fifa World Cup Schedule, Stats and Live Cricket Score. Like us on Facebook or follow us on Twitter for more sports updates. You can also download the NDTV Cricket app for Android or iOS.