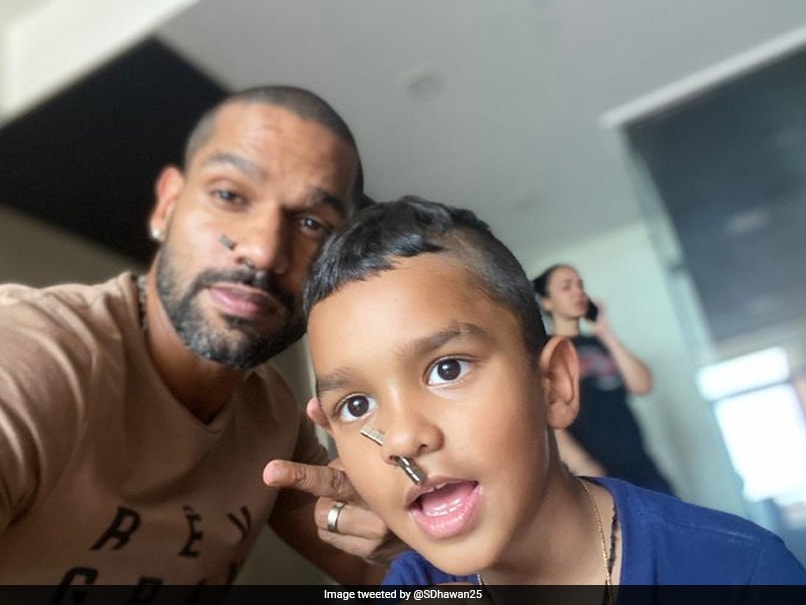 Indian batsman Shikhar Dhawan is quite active on social media platforms during the lockdown and has consistently shared fun posts for his fans. Shikhar Dhawan on Friday, took to Twitter to share a funny photo of himself with his son Zoraver. In the photo, Zoraver and Shikhar Dhawan can be seen wearing "nose rings" with his wife Aesha interrupting their picture. Shikhar Dhawan in the caption of his tweet wrote, "Loving our new nose rings, Thanks Aesha for interrupting our photo session. #PunkRockers".

Shikhar Dhawan often shares photos and videos of himself with his son Zoraver. Last week, Shikhar Dhawan had shared a video where he was seen alongside Zoraver who has learning horse riding.

Shikhar Dhawan who plays for the Delhi Capitals in the Indian Premier League (IPL) will be hoping to return to the field once the final schedule for the cash-rich league is announced by the Board of Control for Cricket in India (BCCI).

In his IPL career so far, Shikhar Dhawan has featured in 159 matches since making his debut in 2008. The left-handed batsman has scored 4,579 runs so far in the cash-rich league with an average of 33.42 and a strike rate of 124.80. However, he is yet to score a century in the IPL.

Shikhar Dhawan was last seen in the three-match ODI series against Australia. During the series, Shikhar Dhawan suffered an injury that kept him out of India's tour to New Zealand in February-March.

The left-handed batsman will be hoping to make the most in the upcoming edition of the IPL.

Delhi Capitals BCCI IPL 2020 Cricket
Get the latest updates on Olympics 2020, Olympics 2020 Medal Tally , Live Cricket Score . Like us on Facebook or follow us on Twitter for more sports updates. You can also download the NDTV Cricket app for Android or iOS.