Shikhar Dhawan took to Instagram to share a video of him dancing with his son Zoravar and got a special reaction from West Indies legend Brian Lara. 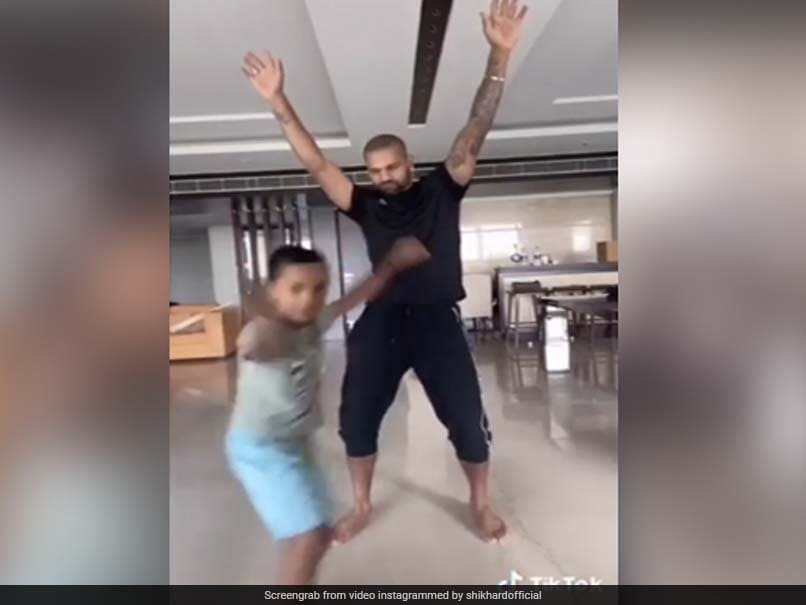 Shikhar Dhawan has been using the forced break from cricket to spend quality time with his family.© Instagram

Shikhar Dhawan, Indian opening batsman, took to Instagram to share a video of him dancing with his son Zoravar that not only caught the attention of his fans but also of the West Indies legend Brian Lara. Shikhar Dhawan, who is spending time at home amid coronavirus pandemic, is using the forced break from cricket to work on different skills like taking boxing classes from his wife Ayesha or dancing to classic Bollywood songs. In the video, Shikhar Dhawan can be seen trying to do the 'siren beat' challenge but the left-handed batsman was interrupted by his son Zoravar who's special cameo turns the video into a hilarious one. "Dance ki asli jodi Like father, like son! #tiktok," Dhawan captioned the video.

Brian Lara posted two laughing emojis on Dhawan's post while the Indian batsman responded with a thumbs up emoji to the West Indies' legend's comment.

Apart from the Lara, fans also flooded the post with heart-warming messages for the Indian batsman.

"Gabbar, you are my fav," another one joined in.

Recently, Shikhar Dhawan posted a video on his Instagram story where the left-hander was seen playing a flute to beat the lockdown blues.

Dhawan during a chat with former Indian bowler Irfan Pathan revealed that his favourite captain is MS Dhoni.

"(Best batting partner will be) Rohit Sharma... I have only played under Virat and Dhoni, so, as of now, Dhoni bhai," Shikhar Dhawan told Irfan Pathan.

Due to the coronavirus pandemic,  the 13th edition of the Indian Premier League was postponed indefinitely by the Board of Control for Cricket in India (BCCI).

Speaking on the future of IPL, Dhawan said that the tournament should take place to spread positivity among people.

"Of course, IPL should take place because people will get positivity from it. Currently, there is only coronavirus news and fear because of it," Dhawan said.

Shikhar Dhawan Brian Lara Cricket
Get the latest updates on ICC T20 Worldcup 2022, check out the Schedule and Live Score. Like us on Facebook or follow us on Twitter for more sports updates. You can also download the NDTV Cricket app for Android or iOS.