Australian Bowler Rattles Batsman With Bouncer, Bowls Him Out Next Ball. Watch 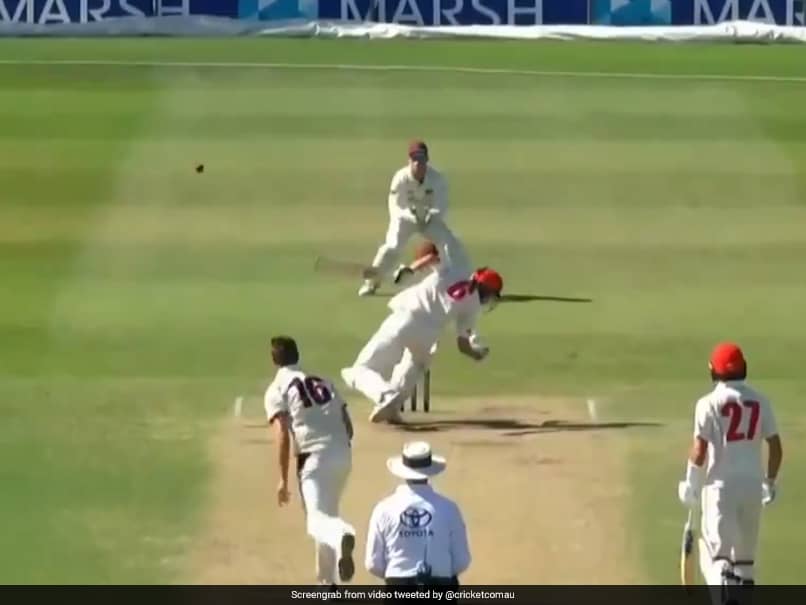 Mark Steketee hit Liam Scott with a bouncer and followed it up with an absolute peach.© Twitter

No batsman likes a well-directed bouncer coming hard at them, and it often shakes them up. For fast bowlers, a good bouncer is a great weapon, and they love seeing opposition batsmen squirm when faced with a bumper. In the Sheffield Shield match between Queensland and South Australia, Queensland bowler Mark Steketee made life very difficult for South Australia's Liam Scott. Bowling on Day 4 of the match, Steketee delivered a nasty bouncer that Liam Scott tried to duck under, but the ball struck him flush on the helmet and he fell to the ground.

He had barely recovered from the blow when, in the very next delivery, Steketee bowled an absolute peach to send the batsman back to the pavilion. The 26-year-old pacer followed his bouncer up with a fuller delivery, slightly wide, which Scott decided to leave alone, but the ball nipped back in to hit the off-stump and dislodge the bails.

The ultimate one-two punch! Thankfully Liam Scott was OK after copping this nasty blow to the helmet, but he had more than a sore head to worry about the next ball #SheffieldShield pic.twitter.com/JkpKLPj1AQ

Queensland had won the toss and elected to bat at the Gliderol Stadium in Adelaide. Centuries from captain Usman Khawaja, Matt Renshaw and Jimmy Peirson helped Queensland put on a big total in the first innings, as they declared at 496/5.

Leg-spinner Mitchell Swepson then took a five-wicket haul as they bowled out South Australia for 154.

Khawaja then scored a breezy unbeaten 46, before Queensland declared at 105/3, setting South Australia a target of 448.

Callum Ferguson scored 97 and Harry Nielsen hit a century as South Australia tried to chase the mammoth total, but they were bowled out for 385 as Queensland won by 62 runs.

Steketee took four in the second innings, including the key wickets of Ferguson and Nielsen.

Comments
Topics mentioned in this article
Liam Scott Cricket
Get the latest updates on IPL 2021, IPL Points Table , IPL Schedule 2021 , live score . Like us on Facebook or follow us on Twitter for more sports updates. You can also download the NDTV Cricket app for Android or iOS.