Sarfaraz Khan brought up the three-figure mark in the 35th over of the innings and upon reaching the landmark, he celebrated in the trademark style of late singer, Sidhu Moose Wala. 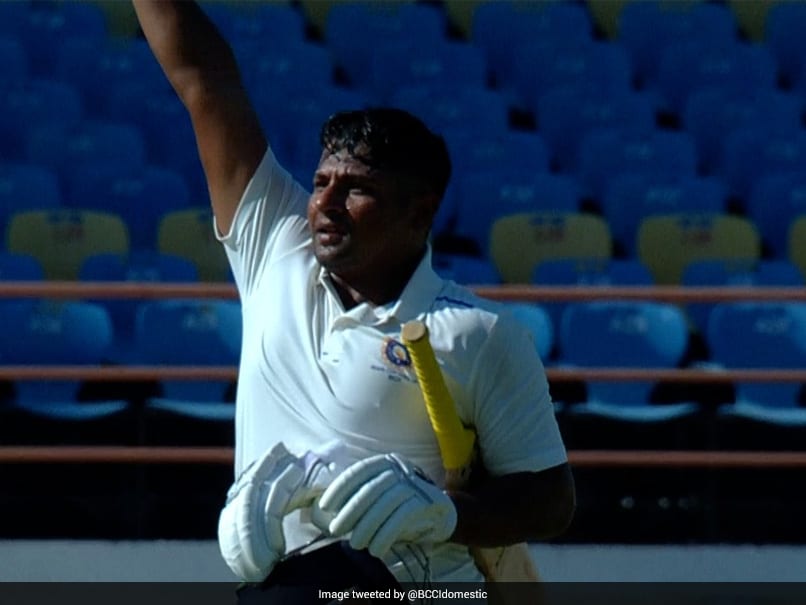 Sarfaraz Khan carried on with his rich vein of form into the ongoing Irani Cup as he smashed a ton on Day 1 while playing for Rest of India. Coming into bat with his side in a tricky spot at 18/3, the right-handed batter played a counter-attacking innings and along with skipper Hanuma Vihari, he revived the innings for his side. Sarfaraz Khan's innings was studded with 20 fours and 2 sixes. His innings strike-rate is a remarkable 77.53.

Sarfaraz Khan brought up the three-figure mark in the 35th over of the innings and upon reaching the landmark, he celebrated in the trademark style of late singer, Sidhu Moose Wala.

What a stunning knock this has been by the right-hander!

Sarfaraz Khan had a brilliant Ranji Trophy season for runners-up Mumbai. He was named the 'Man of the Tournament' for his brilliant performance, which saw him score 982 runs for Mumbai. In six games, Sarfaraz tallied close to 1000 runs at an average of 122.75, finishing at the top of the batting charts. Four centuries and two half-centuries were scored by the batter, with the best individual score of 275.

Talking about Irani Cup between Saurashtra and Rest Of India, the former had been bundled out for just 98 in the first innings, but Rest Of India also lost quick wickets, and the task of rebuilding came onto Sarfaraz and skipper Hanuma Vihari. The duo put on 220 runs for the fourth wicket. Sarfaraz was dismissed after scoring 138 while Vihari scored 82.

Earlier, Saurashtra had been bundled out for 98. Mukesh Kumar returned with four wickets while Kuldeep Sen and Umran Malik took three wickets each.

Sponsored by Vuukle
Comments
Topics mentioned in this article
Sarfaraz Khan Hanuma Vihari Cricket Umran Malik
Get the latest updates on Fifa Worldcup 2022 and check out  Fifa World Cup Schedule, Stats and Live Cricket Score. Like us on Facebook or follow us on Twitter for more sports updates. You can also download the NDTV Cricket app for Android or iOS.