Inzamam-ul-Haq also pointed out the reasons which made Sachin Tendulkar stand out from other cricketers of his generation and rule the international cricket for so long and achieve what no one else could. 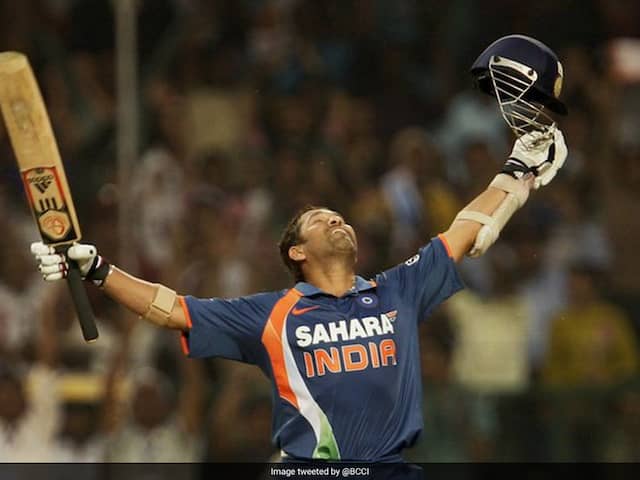 Sachin Tendulkar is the only batsman to have scored 100 international centuries.© Twitter

Sachin Tendulkar, despite retiring from international cricket in 2013, continues to be one of the most loved and admired batsmen, with fans spread across globe. On Monday, when India celebrated the anniversary of Sachin's majestic knock which made him the first man on the planet to score a double-century in One-day International cricket, former Pakistan skipper Inzamam-ul-Haq posted a video on YouTube paying an ultimate tribute to Sachin's incredible achievements and various records that he broke in his 24-year-long international career. In the video, Inzamam also pointed out the reasons that made Sachin stand out from other cricketers of his generation and rule the international cricket for so long and achieve what no one else could.

"I will talk about one player who was born to play cricket. I always had this feeling that he and cricket were made for each other. I am talking about ever-great Sachin Tendulkar," Inzamam said in a video on his YouTube channel.

"What surprises me the most is Sachin came in at a tender age of 16-17 years and played cricket at the international level and gave such incredible performances over the years which is only possible if the player is an extraordinary talent. In fact, if there is anything above extraordinary Sachin Tendular is that player," he added.

Recalling Sachin's start in international cricket, Inzamam recalled a famous incident from his first international tour to Pakistan in 1989 where he took on a challenge from Pakistan leg-spinner Abdul Qadir and smashed him for four sixes in an over.

"It's easier said than done. It was his first international tour and he faced great bowling attack comprising Wasim Akram, Waqar Younis and Imran Khan, among others, and left everyone shocked with his batting skills, especially considering he was so young," said the former Pakistan skipper.

Pointing out what made Sachin stand out from other great batsmen of his generation, Inzamam said he had a strong self-belief which led him to go for records what nobody had imagined before.

"He played in the same era as me and in our era no body used to think about scoring so many runs. Most batsmen used to end their career after scoring 8,000-8,500 runs. Before Sachin, only great Sunil Gavaskar had scored 10 thousand runs and everybody but Sachin thought it will remain invincible. Now I'm waiting to see who will break Sachin's outstanding milestones," said Inzamam, praising Sachin for leading the way.

Ever since making his international debut in 1989, Sachin carried the Indian cricket on his shoulders for more than two decades. He performed playing under immense pressure and that according to Inzamam was another factor which made him so successful.

"I have never seen more fan following of a cricketer than Sachin's. He had fans all around the world. Every time he used to come out to bat he used to be under tremendous amount of pressure to score runs but that didn't keep him from scoring runs," said Inzamam.

Sachin was also a handy bowler, with leg-spin, off-spin, medium pace everything in his arsenal. Inzamam said he always found his googlies to be very deceptive as he never used to pick them up.

"He was not a bowler but even then he was such a genius cricketer that he could bowl leg-spin, off-spin, medium pace. I had faced many great leg-spinners, never had troubles in reading their googlies but it was only Tendulkar who gave me troubles and got me out many times,"

Inzamam concluded by saying that if it were to him he would've never allowed Sachin to stop playing cricket as watching him bat used to be such a delight to the eyes.

"Sachin was the ever great player across generations. He should have played cricket forever as he used to be such a delight to watch. He should've never walked off from the cricket field," Inzamam signed off.

Sachin Tendulkar Inzamam-ul-Haq Cricket
Get the latest updates on IPL 2020, check out the IPL Schedule for 2020 and Indian Premier League (IPL) Cricket live score . Like us on Facebook or follow us on Twitter for more sports updates. You can also download the NDTV Cricket app for Android or iOS.