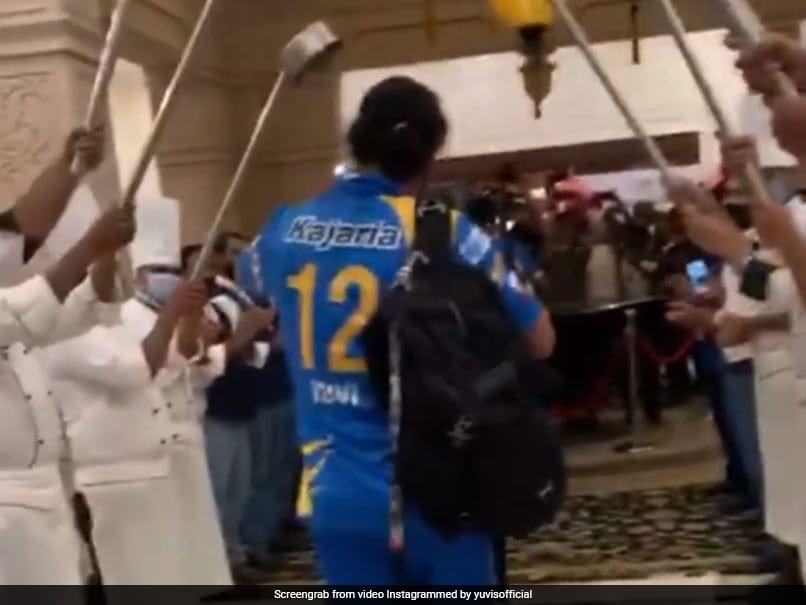 Yuvraj Singh received a guard of honour as he returned to the hotel after Road Safety World Series final.© Instagram

Yuvraj Singh was one of the star performers as India Legends won the Road Safety World Series title in Raipur, beating their Sri Lanka counterparts in the final on Sunday. As the players returned to the hotel, they were given a royal reception by the staff. Yuvraj took to Instagram to share a video where he can be seen dancing his way into the hotel as the staff give him a guard of honour, holding up long-handle pans to imitate swords. A song from the blockbuster hit "Baahubali" can be heard playing in the background.

In the final, Yuvraj Singh smashed four sixes and four boundaries in his 41-ball 60 as India Legends finished with a total of 181/4. Yusuf Pathan also starred, smashing 62 off just 36 deliveries, as he hit five maximums and four fours.

In return, Sri Lanka Legends only managed to score 167/7 in their 20 overs as Yusuf and his brother Irfan Pathan picked two wickets each.

Yuvraj Singh finished the inaugural season of the Road Safety World Series as the highest six-hitter, with 17 maximums from seven matches.

Sri Lanka Legends' Tillakratne Dilshan finished as the tournament's highest scorer with 271 runs, while Sachin Tendulkar was India's most prolific run-getter with 233 runs.

Dilshan was also the highest wicket-taker with 12 scalps to his name, while Yusuf Pathan and Munaf Patel finished behind him with nine wickets each.