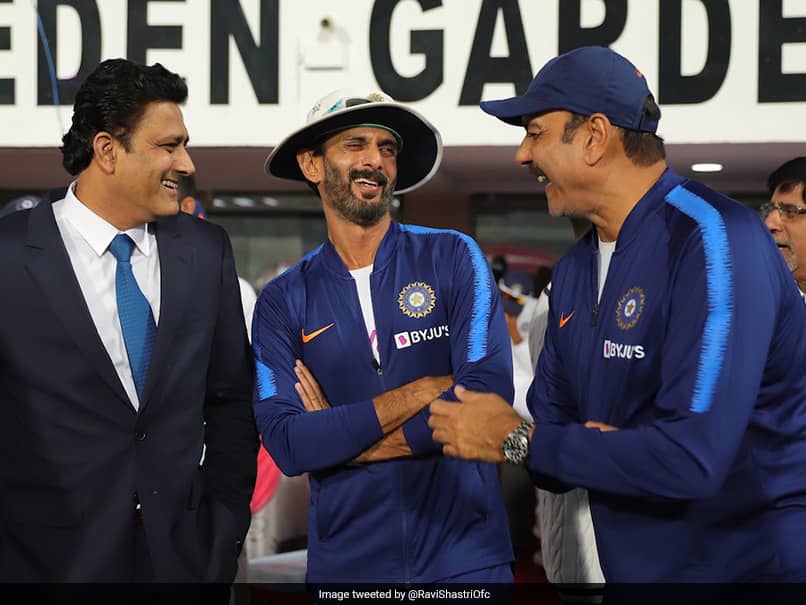 Ravi Shastri, Indian cricket team's head coach, caught up India's most successful Test bowler Anil Kumble after India's emphatic win over Bangladesh in the historic Day-Night Test in Kolkata. Ravi Shastri took to Twitter to post a couple of pictures with Anil Kumble on Wednesday. "Great to catch up with one of India's greatest - @anilkumble1074," Ravi Shastri captioned the image on Twitter. Anil Kumble had admitted to have untenable partnership with India skipper Virat Kohli when he decided to step down from the post of India's head coach back in 2017. Ravi Shastri, since then, has been the head coach of Team India.

Great to catch up with one of India's greatest - @anilkumble1074 pic.twitter.com/frO9XsuE71

"Thanks for tagging Jumbo Sir ....else I would have dozed off," a fan tweeted.

Thanks for tagging Jumbo Sir ....else I would have dozed off

"The question is whether the feeling was mutual. Guess not," another fan joined in.

The question is whether the feeling was mutual. Guess not

Under Shastri's tenure India suffered a heart breaking loss in the semi-final of the World Cup earlier this year when they lost to New Zealand in Manchester. Shastri termed the loss as a bitter pill to swallow.

"For me, the intensity shown by this team is fabulous. The way they have bounced back after those 15 minutes in Manchester. That was a bitter pill to swallow and hurt one and all. But then, the ferocity and intensity they have shown after that in the last three months is unbelievable. This is remarkable and that is why I say if you look back 5-6 years, this will have to be one of the most consistent Indian teams ever across all formats," he had said.

India Cricket Team Ravi Shastri Anil Kumble Cricket
Get the latest updates on IPL 2021, IPL Points Table , IPL Schedule 2021 , live score . Like us on Facebook or follow us on Twitter for more sports updates. You can also download the NDTV Cricket app for Android or iOS.