Ranji Trophy: Ravi Yadav of Madhya Pradesh claimed a hat-trick in his very first over of his first-class career when he achieved the feat against Uttar Pradesh. 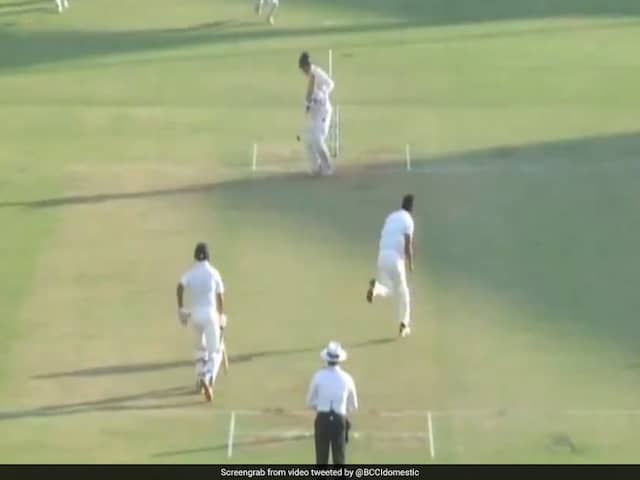 Ravi Yadav picked-up a hat-trick in the very first over on his first-class debut.© Twitter

Madhya Pradesh's Ravi Yadav on Monday etched his name in the record books as he became the first bowler to claim a hat-trick in the very first over on his first-class debut. The 28-year-old left arm fast bowler, who is a native of Uttar Pradesh, achieved this feat playing against his own state at Indore's Holkar Cricket Stadium. Yadav, whose career was plagued by a series of injuries, made his Ranji Trophy debut at the age of 28 years. Yadav came in to bowl as a first-change bowler in his debut match and dismissed Aryan Juyal, Ankit Rajpoot and Sameer Rizvi off successive deliveries to complete his dream debut. The Board of Control for Cricket in India (BCCI) tweeted the video of Yadav's heroics.

ICYMI: A hat-trick to remember!

Ravi Yadav removed opener Juyal by getting him caught by wicket-keeper Ajay Rohera for 13 runs off the third ball of his first over.

Yadav completed his hat-trick by dismissing UP skipper Rajpoot and Rizvi off last two deliveries. Interestingly, both the dismissals were the result of the batsmen failing to read the ball's seam movement and playing the wrong line which sent their stumps flying in the air.

Earlier in the day, Uttar Pradesh had bowled Madhya Pradesh out for 230 but Yadav's hat-trick helped the hosts pull things back a bit as they reduced Uttar Pradesh to 22/3 at stumps on the opening day.

On Day 2, Yadav added two more wickets to his tally to bring up his maiden five-wicket. He returned with figures of 5/61 and played a crucial role in helping his side take a crucial 14-run lead in the first innings.