Parthiv Patel scored an unbeaten 118 off 156 balls at the Sardar Patel Stadium, hitting 15 boundaries off the Goa bowlers. 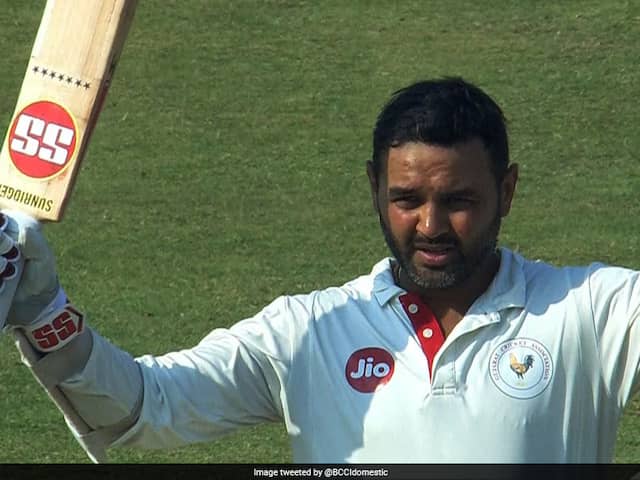 Parthiv Patel led from the front with his 27th first-class century.© Twitter@BCCIdomestic

Skipper Parthiv Patel led from the front with his 27th first-class century and helped Gujarat reach 330 for four on the first day of their Ranji Trophy quarter-final against Goa in Valsad. The left-handed batsman scored an unbeaten 118 off 156 balls at the Sardar Patel Stadium, hitting 15 boundaries off the Goa bowlers. In the process, Patel also completed 11,000 first-class runs. Opting to bat, Gujarat openers Samit Gohil (52) and Priyank Panchal (28) gave a sedate start and added 64 for the first wicket before Panchal holed out to cover. One-down Bhargav Merai (84 off 113 balls) joined Gohil, who failed to convert his start.

He poked at a wide delivery from left-arm spinner Darshan Misal and was caught by Snehal Kauthankar in the slips.

Gujarat were 107 for two. Patel and Merai then started the rescue act. Both the batsmen scored at a brisk pace as they hammered a listless Goa attack.

The duo added 139 runs for the third wicket and did not allow Goa to make a comeback. Merai, a right-handed batsman, struck 12 boundaries. He, however, could not get his eighth first-class hundred, as he departed after a well-made 84.

Leg-break bowler Amit Verma (2-73) gave Goa the much-needed breakthrough after he tossed one up and Merai's attempted drive resulted in an edge in the slip cordon. Verma then removed Manprit Juneja (1) quickly. But the fall of two quick wickets did not deter Patel, who held the innings together.

Patel notched up his hundred after paddle-sweeping Verma for his 13th boundary.

Chirag Gandhi (40 not out), who came in at number six, played the perfect second fiddle to Patel as the two ensured that Gujarat took the honours on the opening day. For Goa, Verma was the pick of the bowlers, while Darshan Misal and Vijesh Prabhudesai (1-60) took a wicket each.

This is Patel's second hundred in Ranji knock-outs, the first being against Mumbai in the 2016-17 final.