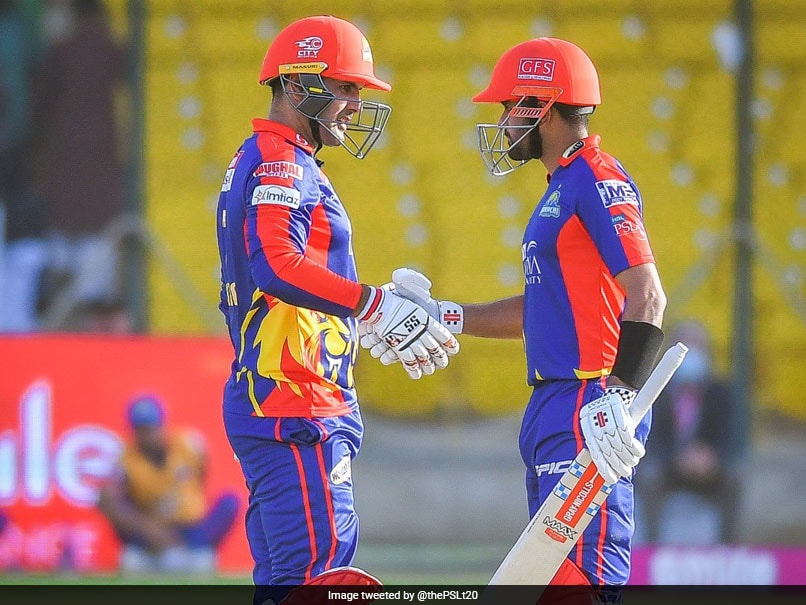 Half-centuries from Babar Azamand Mohammad Nabi guided Karachi Kingsto a comfortable six-wicket win over Peshawar Zalmi on Wednesday. This is Kings' third win in the ongoing Pakistan Super League (PSL) season six. Kings chased down the 189-run target with three balls to spare as Nabi smashed his second successive half-century with a brisk 35-ball 67, studded with eight fours and four sixes and Babar hammered six fours and three sixes in his unbeaten knock of 77 off 47. The pair stitched a match-winning 118-run partnership for the fourth wicket.

Mohammad Imran struck on the first ball of the innings as he dismissed in-form Sharjeel Khan for a duck. Joe Clarke (17 off 14, four fours) and Colin Ingram (three off 11) were next to depart with the scoreboard reading 43 for three at the end of seventh over.

But the three wickets did not inflict the harm which Zalmi had hoped for thanks to a solid Babar-Nabi partnership.

Nabi, who was dropped on 20 in the 11th over, made full use of the reprieve as he smashed Zalmi bowlers all around the park. He brought up his half-century of just 28 balls and hit Amad Butt for three fours and a six in the 14th over, collecting 18 runs.

Babar brought up his half-century off 35 balls and smacked two sixes and a four off Amad's fourth over, the 16th over of the innings which went for 25 runs. For Zalmi, Saqib Mahmood picked two wickets for 41.

Earlier, Zalmi were dealt blows early on in their innings as King's emerging player Abbas Afridi, on his debut, dismissed both openers - Kamran Akmal (21 off 17, four fours) and Tom Kohler-Cadmore (10 off 11, one six) - in the fifth over.

Shoaib Malik, captaining for the first time in PSL 6 due to an injury to Wahab Riaz, was next to walk back to the pavilion after he was adjudged LBW on the first ball of the sixth over bowled by Mohammad Ilyas. The dismissal left Zalmi reeling at 34 for three.

The recovery that the pair of Haider Ali (nine off 12, one four) and Ravi Bopara looked to the stage was interrupted in the 10th over with the dismissal of the former off Dan Christian. Zalmi, at half-way stage, were 69 for four.

Bopara, however, ensured that the dismissal did not have any adverse impact on the scoring rate as he scored a fighting half-century. Over the course of his 40-ball 58, he smashed six fours and a six.

He with Sherfane Rutherford denied Kings' bowlers any further inroads for the next nine overs as the two knitted a crucial 82-run partnership for the fifth wicket. Rutherford struck three fours and as many sixes in his knock of 46 from 32 balls.

That the Zalmi were able to post 188 for five was due to explosive batting from all-rounder Amad down the order. Amad returned unbeaten on 27 from seven balls. The right-handed batsman clubbed Christian for three fours andixes in t two she final over which went for 32 runs - the most expensive over in the history of PSL.

Ravi Bopara Sherfane Rutherford Sharjeel Khan Cricket
Get the latest updates on ICC Women's Cricket World Cup 2022 and IPL 2022, check out the Schedule , Live Score and IPL Points Table. Like us on Facebook or follow us on Twitter for more sports updates. You can also download the NDTV Cricket app for Android or iOS.